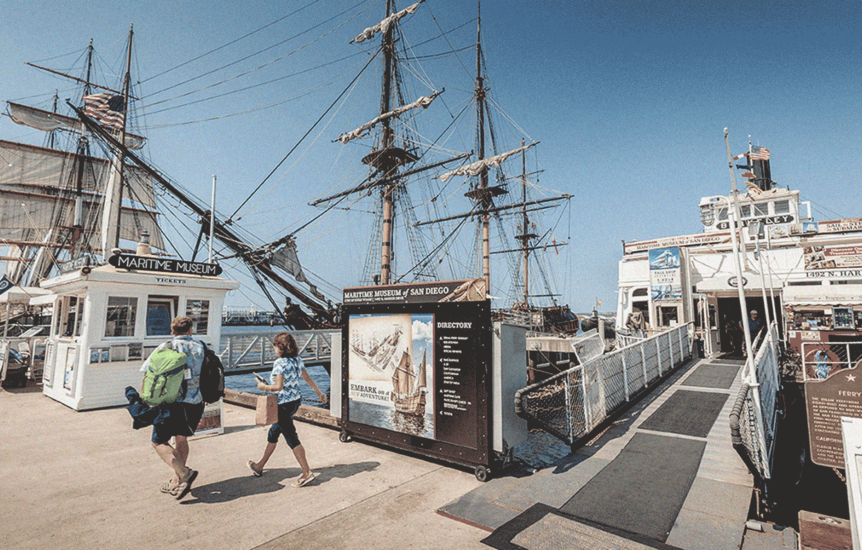 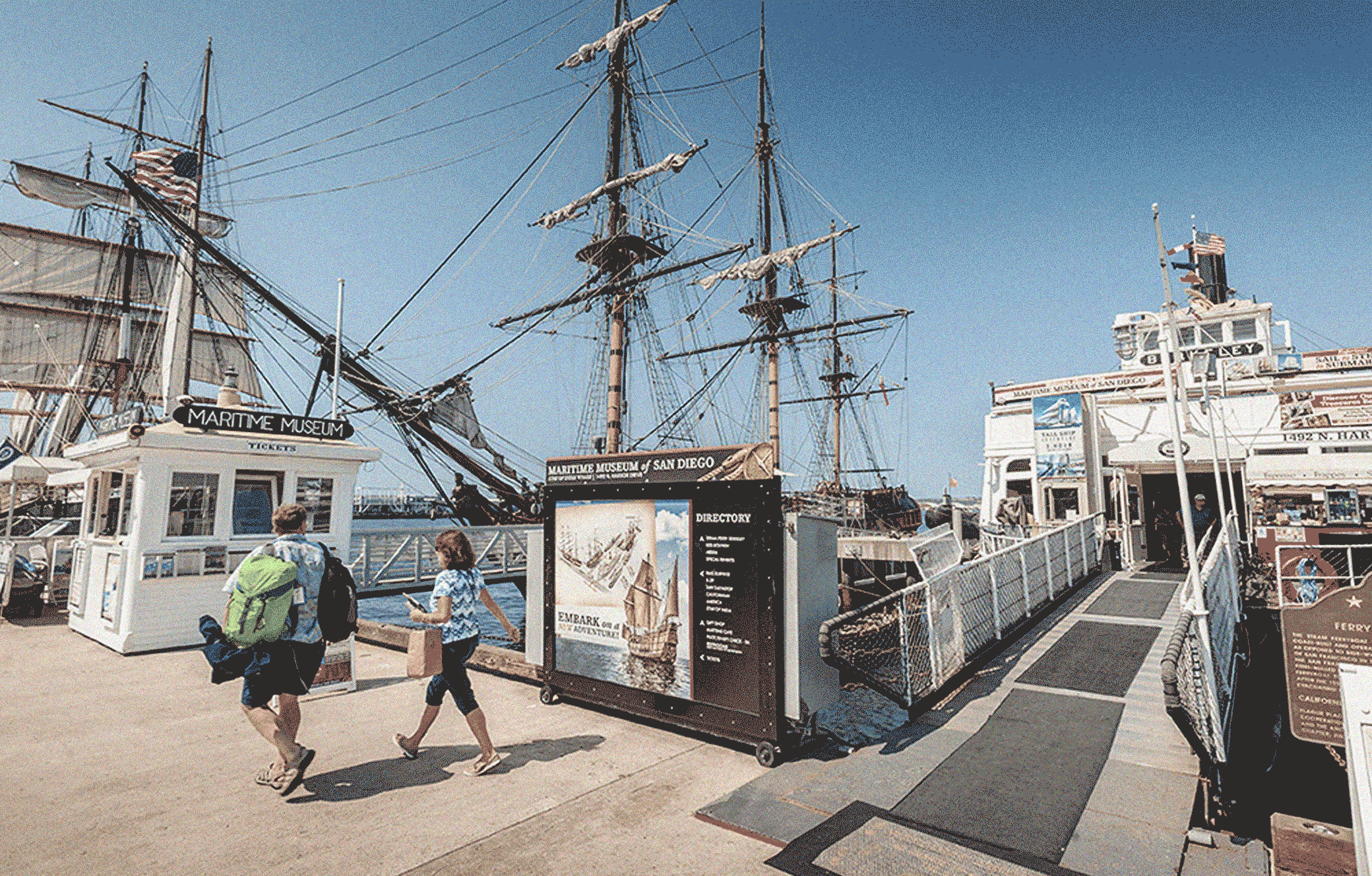 From the world’s deepest diving submarine to the first steam-powered vessels, the Maritime Museum’s flotilla is sure to impress even the most experienced seafarer.

When was the last time you boarded a national historic landmark? The Maritime Museum of San Diego is home to six centuries of maritime history. You can stand on the embarcadero and gaze at the extensive fleet, unaware of the time capsule that awaits you as you explore each one from the top decks, down to the tween decks. Climb aboard with HearHere to uncover the stories of adventures at sea and the history of travel by boat.

Founded in 1948, the Maritime Museum of San Diego hosts one of the world’s finest collections of historic ships representing a unique set of international, national, and state narratives; an outdoor museum where visitors step aboard living history that’s actually floating right here in the harbor. Here at the dock floats the story of nautical exploration with ships ranging from an elegant ocean-goer that rounded the world 21 times to a workhorse steam ferry that went back and forth in 12-miles legs for decades. Artifacts, ship models, exhibits, and galleries are here, telling the stories of naval, fishing, age of sail, and a deep study of our history and connection with the sea. Where do we begin?

Let us start by exploring the newest and “oldest” ship in the collection, the San Salvador. The San Salvador is a replica, just launched in 2016, of the Spanish galleon that discovered this magnificent harbor in 1542—just 50 years after Columbus first sighted the New World. The Maritime Museum of San Diego built that replica, as close as you can come today to how a 16th Century Spanish galleon looked, sailed, and handled. What we would now remark on as a small, fragile ship was once top of the line and state of the art. This technology was modern and advanced nearly 500 years ago, in the 15th and 16th centuries as the Spanish, the English, and the Portuguese traversed the globe. Today, the San Salvador is often seen out for leisurely day sails and also venturing up and down the California coast and to Mexico for Pacific Heritage Tours offering folks an immersive step back in time to sail, crew, and learn about our surrounding Channel Islands and California history. Sail the way Columbus may have with a trip to the San Salvador!

If we look just to the left, we are transported three centuries ahead as we gaze upon the Star of India — 🔊 The Oldest Ship in the World. As one of the of the world’s first iron ships, there was nothing finer in the mid-19th century. One of the amazements of the Maritime Museum is the vast range of nautical innovations represented and preserved. Now, we move full steam ahead towards the next era in boating.

Further along the harbor, we come upon the impressively large white ferryboat Berkeley, which represents the new Age of Steam that made all those beautiful “square-riggers” obsolete  — 🔊 1898 Steam Ferry Berkeley. For almost all the roughly 200,000 years that people have walked the earth, we had only three forces to help us in our labors: Wind, water, and muscle. But starting in the 18th century, English inventor James Watt’s great idea changed all that—suddenly this new power, steam, took over the heavy work, making us no longer dependent on wind, water, and muscle alone.  It was the beginning of the Age of Engines—in which we are now living.   Once an engine could turn a wheel, it could drive a train—or a car—across a continent.    Turning a paddle-wheel, or a propeller, it could drive a ship around the world.   Square-rigged sailing ships couldn’t sail into the wind. The new steamers -- like Berkeley -- however, didn’t care where the wind was—it could drive right into it.  And that was the end of the Age of Sail.

The Berkeley was built to service the last leg of the legendary coast-to-coast railroad trip in cooperation with the transcontinental railroad.  The train tracks came to a stop in Oakland, CA. Before the creation of the Bay Bridge, it was a bone-jarring, 32-mile horse-drawn trip all the way around the south part of the bay to reach the peninsula… until 1898. That’s when the Southern Pacific Railroad built Berkeley—then the biggest ferry boat in the country—to carry its passengers those final miles to the ticketed San Francisco.  It was the only way to cross the final eight miles of water and fulfill the promise on tickets that read “To San Francisco.” The Berkeley continued to serve passengers until 1958.

The Berkeley is a steamboat, not a fire engine, but she did assist in saving lives during the Great Earthquake and fire that devastated San Francisco in 1906. The ferryboat, and her entire crew, became heroes of the rescue. For four days and four nights—pausing only to replenish her fuel tanks—Berkeley ran back and forth across the Bay. In Oakland, she would load up with those smoking, steam-powered fire-engines and their four-horse and six-horse-teams of fire-fighters. Imagine what it looked like—sounded like—smelled like! On her main deck, the odors of a burning city mixed with those of dozens of spirited fire-horses.  Then Berkeley would power across the Bay, at her best 12-knot speed (about 15 m.p.h.), and steer into the San Francisco docks—some of them ablaze.   The firefighters would whip their teams off the ferry and onto the docks. The Berkeley would then load up with refugees, and carry them back to the safety of Oakland.

Right next to the Berkeley, you’ll spot the USS Dolphin, the world’s deepest diving submarine. And behind it lay the stealthy Soviet B-39 submarine; a state-of-the-art mid-20th-century spy sub that sailed against the US through the end of the Cold War. Out in the Bay or dockside, you may also notice the topsail schooner, and California’s official tall ship, the Californian, a replica of the Gold Rush-era revenue cutter that is so popular among thousands of school groups and visitors who go out on day sails and educational adventures.

The museum works year-round to restore, maintain, and preserve this historic fleet. Prepare to be amazed as you float through a collection of the most impressive, important, and intriguing vessels to sail the seas at the Maritime Museum in beautiful San Diego!

Check out the historic Maritime Museum of San Diego here.