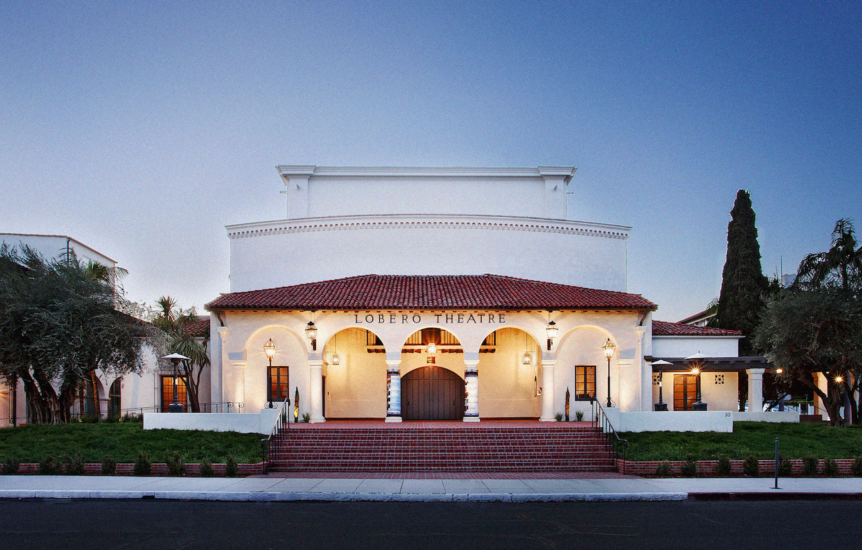 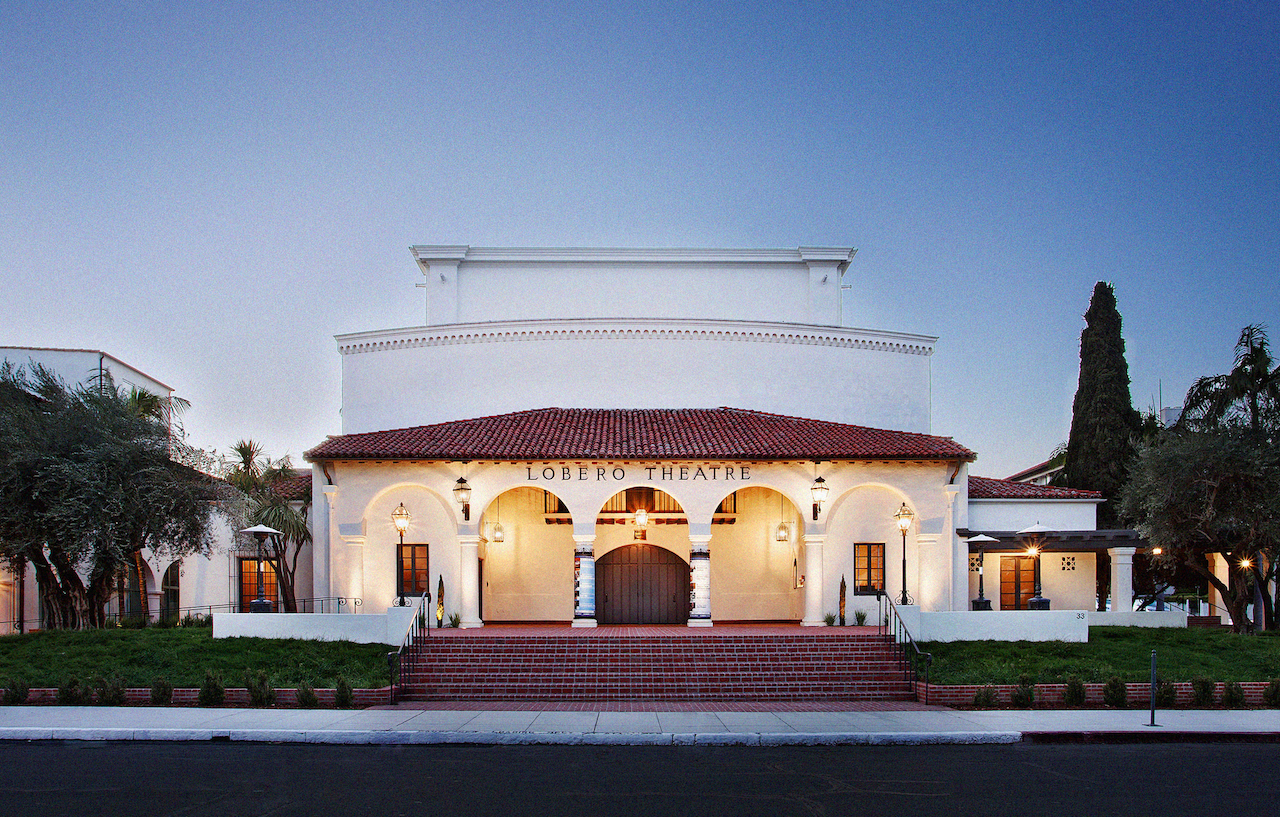 This Santa Barbara landmark has been celebrated for its architecture, longevity, and cultural, social, and political prominence. With a storied past, having hosted historic performances from its opening in 1873 until now, it’s the oldest continually operating theater in California. It’s time to tear that ticket stub and take a seat at the one and only Lobero Theatre. 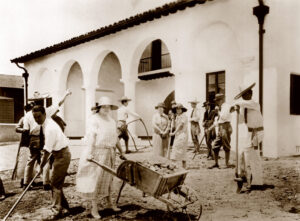 Once an adobe school building, the site was subsequently refurbished and transformed into an opera house by Italian immigrant Jose Lobero, from whom the theatre eventually inherited its name. By the 1920s, the opera house had become dilapidated and was transformed into a theatre by architects George Washington Smith and Lutah Maria Riggs. They had aligned with local civic groups in efforts to unify the town’s architectural look around the Spanish Colonial style. The newly designed theatre opened in 1924 and began its career as a favorite location for productions and performances of all kinds. Its popularity among touring performers and speakers, in part, was due to its convenient location between Los Angeles and San Francisco. Lobero Theatre rose to fame with help of performances from the greats over the decades, including Lionel Barrymore, Sergei Rachmaninoff, Clark Gable, The Bay City Jazz Band, and Martha Graham. This California Historical Landmark has been home to some of the wildest, wackiest, and most wonderful acts to ever grace a stage. 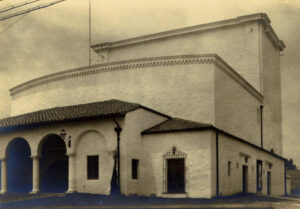 How did sports superstar John Sullivan sell out Lobero Theatre? — 🔊 John L. Sullivan — In a surprising turn of events, the boxing pro became a box office hit after his acting debut at Lobero. Sullivan’s long list of accolades prior to his on-stage career included the titles of the last heavyweight champion of bare-knuckle boxing, first heavyweight champion of gloved boxing, and the world’s first sports superstar. Bare-knuckle boxing was an extreme sport, fought to the finish when one man could no longer continue. There was no limit to the number of rounds. One of Sullivan’s most notable matches lasted an unimaginable seventy-five rounds, two hours and sixteen minutes, leaving Sullivan the winner! With this and an amazing record of going undefeated in 47 consecutive fights, John Sullivan took a hiatus from fighting. During his break, he decided to give acting a go.

In 1890 he was cast as the lead in a five-act melodrama called “Honest Hearts and Willing Hands” and a role that was practically made for him. He emphatically portrayed muscular blacksmith James Daily, the virtuous hero who fights the dastardly villain and wins the hand of leading lady. Critics hated the play and reviewed Sullivan's acting as horrible, but audiences loved it. Everyone came to Lobero to see him. The crowd roared with delight when Sullivan arrived in the fight scenes. 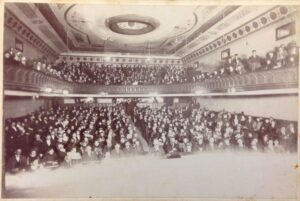 A full house for one of Lobero's many performances.

The Belle of the “Ball”

Many artists can thank their breakout performances at Lobero for propelling them to stardom, including Lucille Ball. — 🔊 Lucille Ball - Lobero — Her passion for the stage started early, enrolling in drama school at age 15, though she only lasted a total of 6 weeks. One of her teachers at the time said that “Lucy [was] wasting her time, and [theirs].” Ball went on to have a stint in modeling, then signed with MGM studios and RKO pictures, landing some supporting and even leading roles, but achieving, at most, a B-list movie star rating. Quality roles eluded her until she landed a five-month touring role in the stage comedy, “Dream Girl” in 1947, which gave her comedic talents the ability to shine in front of a live audience and ultimately brought her to Lobero Theatre stage. Critics saw the New Year’s Eve performance as a turning point in her dazzling career and suggested she never return to movies. Shortly after, she was cast in the CBS weekly radio comedy series “My Favorite Husband”, which was wildly successful. So successful, in fact, that Ball accepted an offer to develop the TV version of the production. This premiered as “I Love Lucy” in 1951, performed in front of a live audience at her request. “I Love Lucy” was the first TV sitcom to ever tape in front of a live audience and has earned legendary status alongside the leading lady, Lucille Ball, herself.

Patrons of The Lobero were elated by the opportunity to hear legendary women’s rights activist, Susan B. Anthony speak during her campaign fighting to secure women’s right to vote in the state of California in 1896.  All 680 seats were filled and hundreds of guests were turned away at the door. Susan B. Anthony believed this California effort was important enough for her to spend eight months on the campaign, speaking in thirty cities across the state. Her Santa Barbara visit was the social and civic event of the year. Her lecture received glowing reviews from Santa Barbara papers. Although the bill received support from Santa Barbara, it was not enough to bring about the passage of the amendment, and it would be twenty-four more years before California women could vote. The Lobero Theatre was a very important venue during the Women's Suffrage Movement in California, where lectures and rallies were regularly featured.  Hear the full story — 🔊 Lobero & Susan B. Anthony 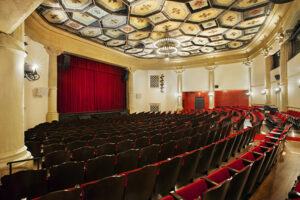 The current interior of the theatre.

Would you be prepared to see the Boy Wizard work wonders on stage before your very eyes? Back in 1896, people were clamoring over tickets to see this magical medicine man. Karl Herrmann — 🔊 The Boy Wizard — was a young German man, better known as the World’s invincible magnetic healer, believed to cure deaf, blind, sick, and paralytic people with his bare hands. For some context, in his heyday, the lines between science and pseudoscience were not clearly defined, and newspapers were filled with ads for cure-all tonics and lotions. The audience was primed to be bewildered by these magical healing powers and completely ate this performance up. All three of his performances at The Lobero received glowing reviews in Santa Barbara papers, remarking on how “people known to need crutches (were) made to walk across the stage with ease and vigor after a moment's treatment.”  His mystifying performance inspired individuals seeking their own miracles to pay a dollar, the modern-day equivalent of $30, to book private healing sessions out of his hotel room. Wondering how this wonder boy’s career came crashing down shortly after these performances? Find out why he fled the country here

With no shortage of interesting tales, be sure to stop by Lobero Theatre the next time you're in Santa Barbara. Better yet, get tickets to one of their upcoming shows and become a part of the story, as California's oldest, continuously operating theatre continues to make history.