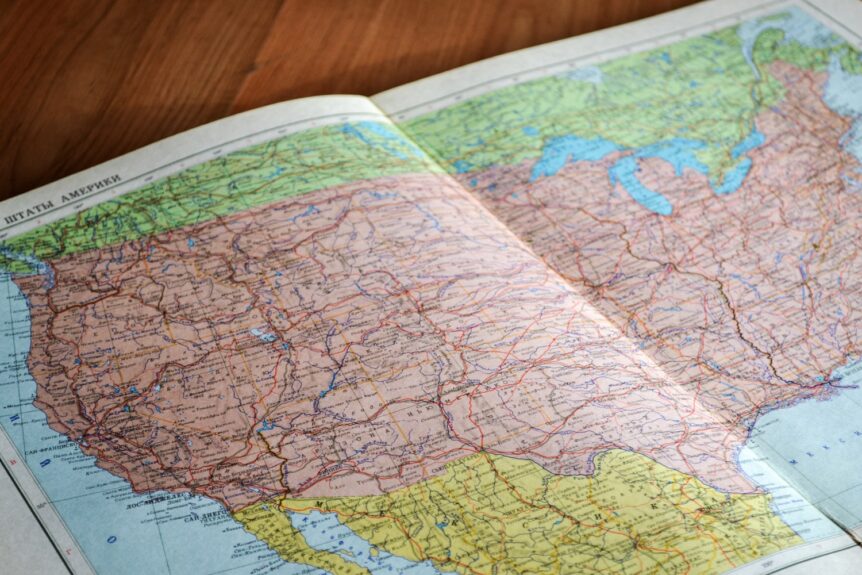 Close your eyes and think of your dream vacation. Are you sipping mai-tais on a white-sand beach in Maui? Partying at Mardi Gras in New Orleans’ French Quarter, enjoying art in Savannah, or tackling the concrete jungle in New York City? Are you skiing down knee-deep powder on snow-capped peaks?

Whether your idea of a good time is going on a hike in Honolulu or wandering Pike Place Market in Seattle, your far-off paradise might be closer than you think. Even if you fantasize about an exotic getaway, a short domestic flight may be able to provide all of the exoticism you need right here in the United States.

There are simply too many options to count when it comes to visiting places in the US. Napa Valley, Charleston, South Carolina, Georgia, Hawaii, Washington, and even Walt Disney World have culturally significant sites, monuments, and fun times waiting for you.

As one of the most culturally and geographically diverse countries in the world, the United States is filled with vibrant cities, awe-inspiring natural landmarks, and unique sites that you never knew existed.

If you’re looking for your next vacation destination, let us convince you of the United States’ splendor. You’ll be blown away by the options within your own backyard. We’ve compiled our favorite places to visit in the US of A and organized them by region—road trip, anyone?

What Are the Best Places to Visit in the Southwest?

From snow-capped mountains to vast deserts and grand canyons, the Southwest provides the most unbelievably diverse geographies you can ever come across.

The Southwest includes Arizona, New Mexico, Nevada, Utah, Colorado, Oklahoma, and Texas. Combine its rich history and action-packed activities, and you have a vacation powerhouse.

One of the seven natural wonders of the world lies in Arizona. Over 277 miles long and up to 18 miles wide, the Grand Canyon is so magnificent that you have to see it in person. No camera can do its beauty or scale justice.

Over six million years, nearly two billion years of Earth’s geological history have been exposed as the Colorado River and its tributaries cut their channels through layer after layer of rock. The Colorado River continues to deepen and widen the canyon to this day.

The best way to experience this wondrous site is to make your way down the canyon. In addition to several hiking trails, you can also take a mule ride to the bottom. Once there, you can take a raft down the Colorado River, which runs through the entirety of the canyon.

This national park isn’t just about nature, as it also hosts one of the most historically significant sites in the entire world.

In the late 12th century, the Ancestral Puebloan people native to this area built massive dwellings beneath the overhanging sandstone cliffs. Ranging in size from one-room storage units to entire villages of more than 150 rooms, they lived in these dwellings for nearly a century before migrating south.

Today, these dwellings are one of the best-preserved historical sites in the country. A trip to this UNESCO World Heritage Site is a must for travelers of all ages and interests.

Vegas, baby!  From playing roulette at the world’s most renowned casinos to seeing shows from legendary artists, Las Vegas is as much fun for the single adult as it is for the entire family.

A resident artist since 1996, David Copperfield puts on some of the most mind-bending shows this side of the Mississippi. If magic isn’t quite your style, there are tons of other options. From Usher to Celine Dion, Vegas has a show for you.

After spending your money on poker and fine-dining, enjoy a stroll down the Vegas Strip––the most vibrant street in the country.

Along the way, you’ll see the magnificent water show in front of the Bellagio, the 460-foot high Eiffel Tower, and Venice-inspired canals at The Venetian.

What Are the Best Places to Visit in the Northeast?

Coastal cities, mountain resorts, autumn leaves, fresh clam chowder—are you in heaven yet? The Northeast may be the next best thing to those pearly gates.

As the first region colonized by English settlers in the 17th century, the Northeast provides enriching historical value and some of the most stunningly diverse terrain in the country. One of the best parts of the Northeast, though, is that it’s easily road-trippable.

If you’re an American history buff, you have to visit Boston.

One of Beantown’s must-see attractions is the Freedom Trail. This 2.5-mile stretch encompasses 16 locations with historical significance, including the Boston Common, Paul Revere House, USS Constitution, Old South Meeting House, and the site of the Boston Massacre.

After throwing tea into the Boston Harbor, you can catch a game at the historic Fenway Park, home to the Red Sox since 1912.

Don’t sleep on Maine! This gorgeous state is home to some of the most stunning coastlines in the entire country.

Up north is Acadia National Park, which exemplifies Maine’s beauty at its best. In addition to more than 45 miles of bike trails, Acadia offers the best hiking in the northeast.

One of our favorite trails is Thunder Hole, a small inlet in Acadia’s unrivaled coastline where waves crash against the rocks, creating a thunderous sound and spraying water up to 40 feet in the air.

Pro tip: Travel to New England during the fall. You’ll be overwhelmed by the vibrance of the autumn leaves and the fall foliage.

What Are the Best Places to Visit in the Southeast?

America’s Southeastern region boasts a staggering range of diversity, from the vast Appalachian Mountains to the tropical Florida Keys.

Similar to the Southwest, the Southeast truly exemplifies the geographical and cultural range that the United States has to offer.

The capital of Tennessee picked up the nickname “Music City” due to its extensive musical history. A significant landmark in the birth of country music, Nashville also hosted such legendary artists as Elvis Presley, Bob Dylan, and Paul McCartney.

If walking among music history appeals to you, look no further than music row. This storied street of studios and record labels is home to the legendary RCA Studio B, where the “Nashville sound” was born. There, you can tour the studio where such artists as Dolly Parton, Jim Reeves, and Willie Nelson recorded their most iconic hits.

A trip to Nashville wouldn’t be complete without a walk down Broadway. This bustling street in downtown Nashville is filled to the brim with live music venues, honkey tonks, and some of the best food in the entire Southeast.

The stunning state of Florida features one of the most unique road trips in the contiguous U.S. We recommend renting a convertible because this 165-mile stretch from Miami to Key West offers warm, tropical weather and beaming sunshine that’s best enjoyed with the top down.

United States Highway 1, colloquially known as the Overseas Highway, takes travelers across 42 bridges to traverse the Florida Keys, a string of islands south of the Florida mainland. The most iconic of these bridges is the Seven Mile Bridge. Among the longest bridges in the world, this aptly named bridge spans seven miles over the glimmering ocean.

As you drive from island to island, you can scuba dive in the dive capital of the world, enjoy a slice of key lime pie, and soak in the history of Key West.

What Are the Best Places to Visit in the West?

As the saying goes, “West Coast, Best Coast.” So, you can say we left the best for last.

While such California cities are incredible destinations, we wanted to focus on the sites that truly showcase the unique beauty the west offers.

Perhaps California’s most iconic natural site, Big Sur is a section of California’s central coast where the Santa Lucia Mountains rise abruptly from the Pacific Ocean. That’s right––the mountains are right on the ocean.

Frequently attracting sightseers for its dramatic scenery, Big Sur has been called the USA’s longest scenic stretch of undeveloped coastline. To put it lightly, that is an understatement.

To fully experience the incomprehensible beauty of this landmark, check out the rocky Pfeiffer Beach, which features one of the most famous rock arches in the world. Bixby Creek Bridge, an iconic and oft-photographed bridge, provides one of the best unobstructed views of Big Sur and its surrounding area.

Spanning over 2.2 million acres across Wyoming, Montana, and Idaho, Yellowstone is one of the biggest national parks in the nation, boasting a breathtaking array of wildlife, hydrothermal features, and historical sites.

In fact, in 1978, Yellowstone was declared a UNESCO World Heritage Site for its historical importance and distinct hydrothermal activity.

One of the best ways to experience Yellowstone is to explore its 10,000 hydrothermal features, including the world’s largest concentration of geysers. The most famous of these geysers is Old Faithful, which erupts up to 8,400 gallons of boiling water every 90 minutes.

In Yellowstone, you can also spot the nation’s largest herd of bison. While these majestic creatures were nearly extinct due to overhunting, conservation efforts have allowed them to thrive in Yellowstone.

This list is just the tip of the iceberg when it comes to the best destinations in the United States. We could make a list for each state! HearHere wants to make your experience even more special no matter where you travel.

Download HearHere and explore what makes the United States such a unique destination for travelers of all kinds. We curate content based on your interests—from sports to history to local culture—and package it into a high-quality “road trip companion” you can access at any time, so you don’t miss a thing.