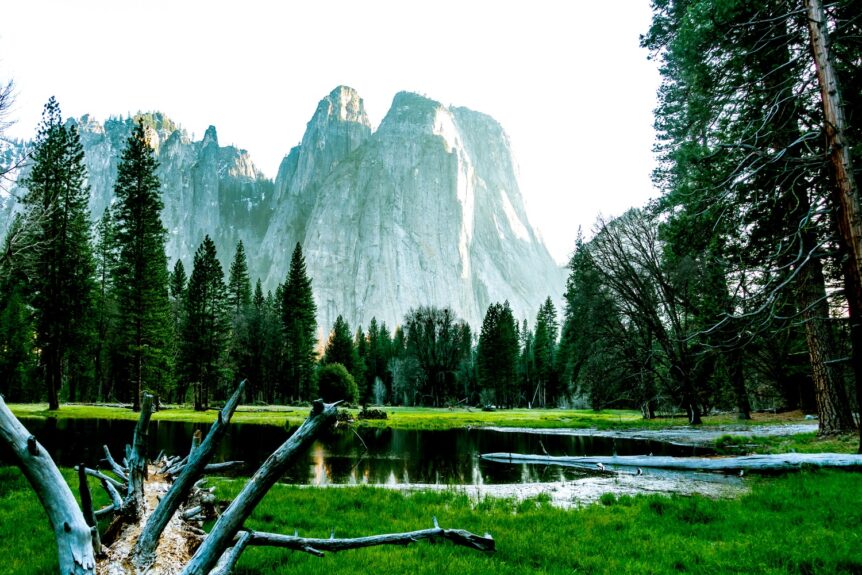 7 Best Things to do in Yosemite

Located amidst California’s magnificent Sierra Nevada mountain range, Yosemite is one of the most-visited national parks in the United States. With its steep cliffs, lush valleys, and thunderous waterfalls, it’s no wonder Yosemite is such a popular destination among travelers worldwide.

Whether your goal is to climb rocks among the pros (El Capitan, anyone?), traverse atop the steepest peaks, or appreciate Yosemite’s unparalleled views from a comfy chair, this national park has no shortage of activities for any type of traveler.

If you’re planning your next national park vacation or looking for the best day hikes, Yosemite is the place to be. These are HearHere’s favorite things to do in Yosemite National Park.

As one of the tallest waterfalls in North America, Yosemite Falls is a must-see. Fortunately, that won’t be difficult—there are ample views of the falls from Yosemite Valley. Whether you’re sipping your morning coffee or taking a bike ride along the Merced River, you’ll be greeted by Yosemite Falls’ majesty every step of the way.

Nonetheless, the best view of Yosemite Falls is from the top, and we’ll go as far as to say that a trip to Yosemite is incomplete without that view.

The Upper Yosemite Falls trail begins with half a mile of steep switchbacks that cut into the mountains. Then, a short path just off the main trail provides one of the best viewpoints of Yosemite Falls. The falls are deafening during the spring and early summer after the winter snow has melted.

From there, you can continue the rest of the 7.6-mile hike to the top. While the hike is strenuous, you’ll be rewarded with one of the best views in the state.

From the height of two Empire State Buildings, watch as a thunderous stream of water cascades into the Yosemite Valley below. It's an experience you will never forget.

If you’re looking to kick it up a notch, lace up your boots and face the world-renowned Half Dome. This is not your average hike, as its over 14-mile round trip distance is an all-day affair.

Furthermore, as the most strenuous hike in Yosemite, it requires a baseline level of fitness. Several months of regular training is recommended. Actually, Yosemite Falls serves as a perfect training hike before your ascent.

After nearly 14 miles of hiking, you will be met with a 400-foot ascent of the rock’s titular dome. This is a steep climb up solid granite rock, supported only by metal cables. Accidents at this stage are common, so it is recommended that you bring safety gear, like a climbing harness.

By the time you reach the top, you’ll be rewarded with a view of the Yosemite Valley from 4,800 feet above. As you look off Half Dome’s sudden dropoff, you will wonder how you’ve lived without experiencing this view.

Pro tip: Only 300 hikers per day are permitted to make this climb, and you’ll need a permit to ascend the metal cables to reach the top of the dome. These permits are distributed by lottery via Recreation.gov.

If you’re looking to escape the modern world, Yosemite is one of the best places to do it. However, with over four million visitors each year, the crowds can get hectic. Try traveling in the off-season to avoid the pack. Yosemite in the fall is not only far less crowded, but it also offers a uniquely intense beauty.

If you really want to get off the grid, Yosemite’s High Sierra camps are just what the doctor ordered. Each of these five camps in Yosemite’s backcountry is only accessible by foot or mule. Rather than people, you’ll be surrounded by pure, unadulterated nature. No visitor centers, no restaurants, no tour buses—just nature.

Plus, these camps come with plenty of luxuries. Not only do they offer canvas tent-cabins, but they also provide breakfast and dinner each day with an optional lunch. You’ll be able to explore Yosemite’s most inaccessible backcountry without needing a heavy backpack.

Simply put, this is glamping meets backcountry backpacking for a match made in heaven.

4. Participate in a Photography Walk

Next, check out the Ansel Adams Gallery, a museum dedicated to the work of renowned landscape photographer Ansel Adams. Yosemite was a favorite location of Adams’ for a reason––its marvelous terrain makes it nearly impossible to take a bad picture.

During the summer months, the Ansel Adams Gallery provides free “Camera Walks.” On these walks, you will be led by a professional photographer across some of Yosemite’s most picturesque sites. You will also receive tips and tricks on capturing landmarks like Half Dome and Yosemite Falls.

At no cost, it's definitely worth a shot. Who knows, maybe you’ll be the next Ansel Adams!

5. Watch the Sunset at Glacier Point

No matter what time of day you make the hike, Glacier Point will provide one of the most stunning views of the Yosemite Valley. However, this view is amplified tenfold when experienced during Yosemite’s unparalleled sunsets.

Sitting over 3,200 feet above the Yosemite Valley, Glacier Point offers one of the best views in the park of Half Dome. If climbing Half Dome isn’t your vibe, catching a view of it from Glacier Point is the next best thing. When the sun sets, Half Dome turns a majestic orange-gold color, making the view from Glacier Point even more picturesque.

Glacier Point also provides one of the best stargazing spots in the entire state, especially during a new or crescent moon. Not only will you get a vibrant smattering of the stars, but you can also clearly see the smearing of the Milky Way across the night sky. Yosemite has very low light pollution and a high elevation, allowing the stars to show themselves at their full potential.

After a full day of exploring the park, retire to Glacier Point for a show put on by mother nature. Sticking around from sunset to dark will reward you with an otherworldly serving of beauty.

6. Walk Among the Sequoias

In addition to towering cliffs and deafening waterfalls, Yosemite is renowned for its ancient Sequoia forests. Shooting to heights of over 150-feet, some of these old-growth Sequoias are nearly 3,000 years old. That means these trees were nearly 1,000 years old when the Roman Empire was first built.

There are three main Sequoia groves in the park. The largest and most popular is the Mariposa Grove, where you’ll find roughly 500 of these towering trees. The Tuolumne Grove is far smaller, but it’s also less crowded and home to the famous walk-through tree.

Have you ever walked through a tree before? The smallest grove is the Merced Grove; however, the smaller crowds will allow a more intimate experience with the trees.

These Sequoias were here long before us, and barring catastrophe, they’ll be here long after us. With that in mind, avoid climbing on or carving into the trees. The next generation of visitors will thank you.

One of the best and most popular ways to get around Yosemite is via bicycle. Yosemite has over 12 miles of paved bicycle paths, or you can ride on the regular roads (so long as you obey traffic laws).

No destination is needed, as Yosemite’s bike paths make it impossible to get lost. Simply hopping on a bike and cruising around the park will make for one of the most fun and memorable days of your trip.

Views accessible from the bike path include Mirror Lake, Tenaya Creek, and Yosemite Falls. Perhaps the best way to experience Yosemite’s bike paths is to pack a picnic and explore the park until you find the perfect spot to chow down.

If you don’t have a bike, you can rent bikes from Curry Village, Yosemite Village, and Yosemite Valley Lodge. If that’s not quite your speed, you can also rent electric scooters. On top of that, there are ADA options like hand-crank bikes and tandem bikes so everyone can enjoy this magical experience.

Yosemite is one of the most beautiful places in the U.S. and offers everything an adventurous soul desires. From giant sequoias with a tunnel view to John Muir Trail, the Mist Trails, Tuolumne Meadows, Tioga Road, and hiking trails, Yosemite has thrills for everyone.

Are you looking for something to listen to on your road trip to Yosemite? Download HearHere and explore why Yosemite is revered among outdoor enthusiasts, history buffs, and thrill-seekers the world over.

Our collection of over 8700 bite-sized stories will keep you company on your trek, exploring the entertaining, surprising, and informative history of the world around you. Whether you’re seeking out the peaks of Half Dome or the valley floor below, these local stories help you connect to Yosemite in a way you’ve never experienced before.

Check out HearHere today, and bring Yosemite’s landscape to life.

16 Best Things to Do in Yosemite | US News

Top 10 Things To Do in Yosemite National Park | My Yosemite