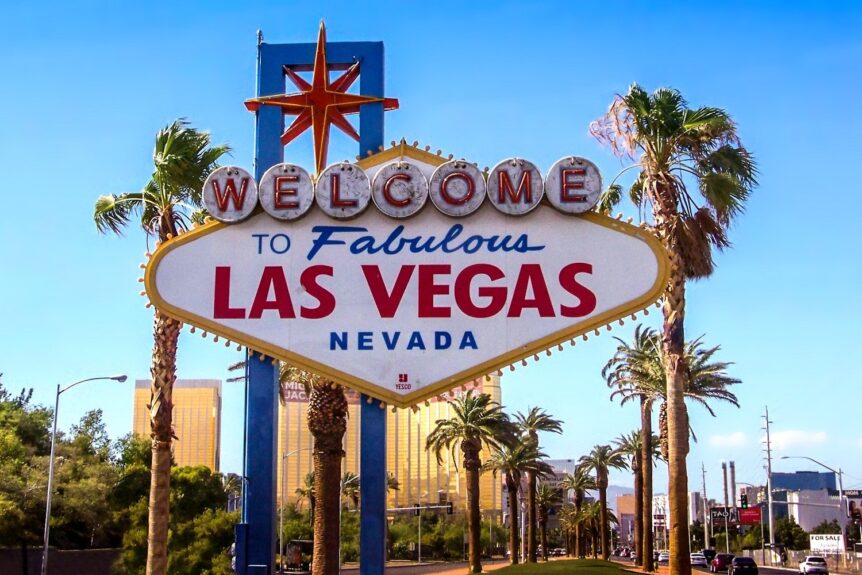 If you’re planning a trip to Las Vegas, you can rest assured that there will be no shortage of things to do. The endless options are exactly why Sin City is widely touted as the adult’s playground. But it isn’t all lounges, gambling, and neon signs. Did you know Vegas can also be as great a destination for families as it is for adults? There’s plenty to do for kids if you know where to look.

Las Vegas offers something for everyone, from playing roulette at opulent casinos to seeing some of the world’s most legendary shows. In addition to the best nightlife on the planet and in Nevada, Las Vegas offers world-class dining, unforgettable concerts, and an endless amount of activities.

It is truly impossible to experience everything that Sin City has to offer, so we’ll try to narrow it down for you. Here are HearHere’s favorite things to do in Las Vegas.

Stroll Down the Strip

Walking down the famed Las Vegas Strip is the first thing most people do upon arriving––and you should too. The 4.2-mile stretch down South Las Vegas Boulevard truly epitomizes the energy of Las Vegas.

No matter the time of day or night, the strip will be bustling with hoards of travellers, bright lights, and loud sounds. Along the way, you will find six of the ten largest hotels in the world. Some of the many attractions include the 460-foot high Eiffel Tower Viewing Deck, the fountain show at the Bellagio, the Vegas High Roller, and the Mirage’s Volcano.

The sights and sounds of Las Vegas truly cannot be matched. A short walk down the most electrifying strip in the world will be sure to energize you for one of the most unforgettable vacations of your life.

Check Out One of the Resident Artists

Las Vegas residencies are a concept that was born in the 1940s. Liberace, Vegas’ first resident artist, earned $50,000 per week performing regular shows at the now-defunct Riviera Hotel and Casino. Since then, such world-renowned superstars as Elvis Presley, Frank Sinatra, and Celine Dion have held residencies throughout their careers.

Today, resident artists include Usher, Santana, Sting, and Shania Twain. If you’re not feeling a concert, check out a mind-blowing magic show by David Copperfield––a Las Vegas resident since 1996. Tickets can be pricey, but these shows are once-in-a-lifetime performances.

Perhaps no casino in the world is more iconic than Caesars Palace in Las Vegas. In many ways, Caesars Palace epitomizes the Vegas spirit––as luxurious as it is excessive. Unveiled in 1966, the marble halls of Caesars Palace match the splendor of the Roman Empire. For the architecture alone, it is worth a visit.

Caesars Palace has an array of the finest eateries in the city. From authentic Chinese food to Michelin-starred French fare, you can take a culinary journey across the world.

Caesars Palace is also home to some of the best shows in Vegas. While Celine Dion is a mainstay, the Colosseum hosts other artists like Jerry Seinfeld and Rod Stewart.

You can also go on a shopping spree in the palace’s high-end strip. The Forum Shops at Caesars includes 150 luxury retailers, outselling even Rodeo Drive.

Hop From Club to Club

Vegas is the world’s party capital, so you would be remiss not to visit at least one of its legendary clubs. You can now take a guided tour that takes you from spot to spot. In fact, these clubs keep getting better and better due to the game of one-upmanship between them.

LIGHT at Mandalay Bay is known for its unmatched theatrics, as they have Cirque du Soleil-level acrobats performing throughout the club. Meanwhile, Hakkasan at MGM Grand comes in as the largest nightclub in the world. Regular performers include Tiësto, Steve Aoki, and Calvin Harris.

Vegas doesn’t leave the partying to just the nighttime, though. Each resort has its own day club that hosts afternoon pool parties throughout the year.

Check Out the Bellagio

Another legendary Vegas hotel-casino, the Bellagio is perhaps best known for its fountains. Every fifteen minutes to thirty minutes, the Bellagio’s fountains, comprising 1,200 nozzles, put on an otherworldly waterworks and lights show.

Inside the Bellagio, you can find its conservatory and botanical gardens. Free to the public, the Bellagio Conservatory and Botanical Gardens features beautiful rotating displays with mesmerising floral arrangements created by a team of 120 horticulturalists.

The Bellagio further boasts its Gallery of Fine Art, which has featured such artists as Andy Warhol, Ansel Adams, and Alexander Calder. Its infamous high-limit casino has also been the host of several World Poker Tour tournaments.

After a Michelin-starred dinner in the Bellagio, you can catch one of Vegas’ signature shows––O by Cirque du Soleil.  Continuing on the Bellagio’s aquatic theme, this acrobatic show is set in an Olympic-sized pool and involves 85 world-class performers.

Unwind at a Spa

As fun as downtown Las Vegas is, it can get overwhelming. Whether you lost some money at the casino or need to clear your mind after a long night, Vegas’ unmatched spas are here to help you unwind while providing an expectedly opulent experience.

Lit by intimate lanterns, The Spa at Encore is a portal to an inconceivable wonderland of opulence. Did you know synchronized messages existed? At Encore, you can get a massage from two masseuses at once. Other indulgences include the Polynesian-influenced Nalu Body Ritual, Citrus Soufflé Body and Facial Treatment, and pore-opening saunas.

Vegas is truly unrivaled when it comes to its self-care options. The Spa and Salon at Aria offers a diamond and white jade facial and the Spa at LINQ boasts a Himalayan salt therapy cave. We don’t know that is, either, but it sounds amazing.

Take in the MGM Grand

As the nation’s largest hotel, the MGM Grand boasts 6,852 rooms. The massive scale of this hotel-casino also comes with a massive set of activities for its visitors.

If you can, check out an event at the MGM Grand Garden Arena––a 17,157-capacity stadium in the hotel. This storied arena has hosted some of history’s most legendary sporting events, such as the infamous “bite fight” between Mike Tyson and Evander Hollyfield.

The MGM is also home to New York, New York––Vegas’ love letter to the big apple. This replication of Manhattan includes models of the Empire State Building, Statue of Liberty, and Ellis Island. It even has a wide offering of New York culinary staples, such as a slice shop, irish pub, and dirty water hot dogs.

If you’re looking for dinner and a show, MGM is an excellent choice, like many of Vegas’ casinos. After a meal at the unrivaled L’Atelier de Joël Robuchon, check the adults-only Zumanity––a daring burlesque/cabaret hybrid put on by Cirque du Soleil.

Non-stop action is synonymous with Vegas; however, there are also ways you can escape the hustle and bustle for a day.

Just outside of Vegas is Death Valley National Park is just outside of Vegas, the largest national park in the contiguous United States. There, you can enjoy a diversity of terrain, including salt-flats, sand dunes, badlands, valleys, canyons, and mountains. It is also designated as a dark sky preserve, meaning its lack of light pollution results in some of the best stargazing in the country.

A closer option is Red Rock Canyon National Conservation Area. This amazingly colorful display of geology features gorgeous hiking trails, rock-climbing, and horseback riding. You may even be able to spot an endangered desert tortoise, which are protected in this conservation area.

If you’re looking for a less adventurous option, take a quick excursion to Hoover Dam. This feat of American Engineering is a stone’s throw away from the Vegas strip.

Be Amazed by The Venetian

The second-largest casino and hotel complex, The Venetian is a slice of Italy. This Italian-themed resort is so massive, in fact, that you can take gondola rides down its own Grand Canal.

In addition to the Grand Canal, The Venetian has replicated many other Italian landmarks, such as St Mark’s Campanile, St Mark’s Square, the Rialto Bridge, and the Doge’s Palace. You can marvel at this replicated city by strolling down the Grand Canal Shoppes––a collection of over 200 retailers and eateries.

The fun doesn’t stop there, though, as there are four theatres and six clubs are within its 53 floors. It is truly a piece of art.

In Las Vegas’ arid climate, golf is a year-round game. Plus, there are over 50 golf courses to choose from, many of which are considered to be the best in the nation.

The only course on the strip, and considered to be one of the best, is the pine-framed Wynn Golf Club. Another world class option is TPC Las Vegas, which provides breathtaking views of the Las Vegas skyline and Red Rock Canyon.

Las Vegas is truly the City of Lights (eat your heart out, Paris), so the possibilities for entertainment and good times are endless.

Here are just a few more places worth mentioning if you’re making a trip to Las Vegas:

HearHere Is Ready for Your Next Las Vegas Road Trip

Want to learn more about Las Vegas for your next road trip? Are you looking for something to listen to on the ride there? Download HearHere and explore what makes Las Vegas the “Entertainment Capital of the World.”

We curate content based on your interests – from sports to history to local culture – and create your perfect “road trip companion” you can access at any time, so you don’t miss a thing. To get you started right on your Vegas trip, check out HearHere’s audio story about The Neon Boneyard, an insider spot at the Neon Museum.

Las Vegas is a city synonymous with luck; a roll of the dice or the perfect hand can change your life. Hitting the jackpot on the casino floor is an iconic Vegas moment. However, nothing compares to the memories made while cruising down The Strip (or beyond) and learning how those bright lights and desert nights came to be.

Find the Best Things to Do in The Strip | 10Best.com

Why Las Vegas Is The Ultimate Party Destination | FlavourMag.co.uk