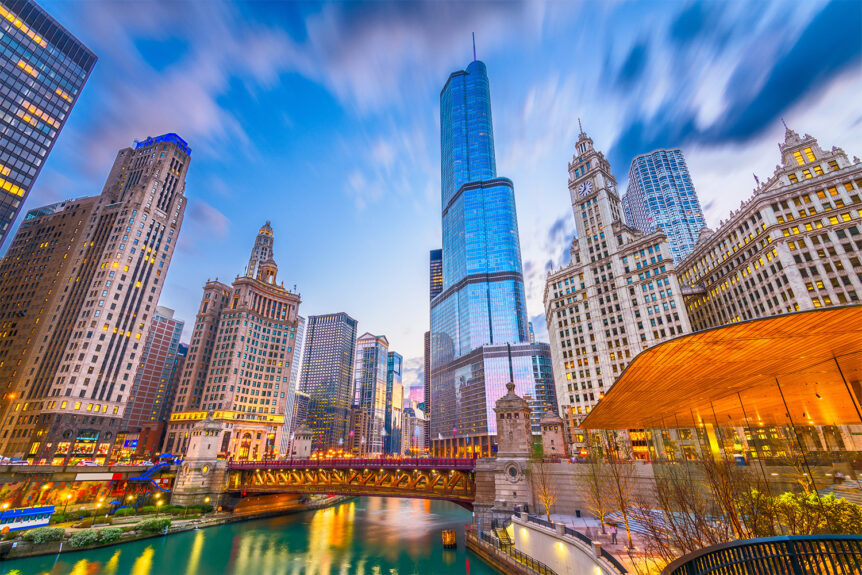 The Windy City is the third biggest city in the United States and one of the most eventful for tourists and residents alike. Located on the shores of jaw-dropping Lake Michigan, Chicago has a rich history and vibrant culture contributing to the unmatched energy and pride that pulses through its streets.

In addition to some of the best food you will ever taste, Chicago offers endless entertainment options. From tours of its historic underworld to catching fly balls at the storied Wrigley Field, Chicago is a city that you will miss as soon as you leave.

If you’re visiting Chicago for the first time or just looking for new things to do, check out HearHere’s favorite activities in the Windy City.

Some of the best views of Chicago’s iconic skyline actually come from below. Set out on Lake Michigan or the Chicago River, where you can admire Chicago’s scale and beauty.

From gentle lake cruises to high-octane speedboat rides, there’s an option for every age and taste. The Classic Lake Tour offers a 40-minute cruise complete with recorded commentary of Chicago’s landmarks and history.

There are also several boat tours of Chicago’s architecture. Each tour provides a clear view of Chicago’s historic structures accompanied by live commentary from an expert guide.

Look Down From the Skydeck

Today, it still stands within the top 25, and its Skydeck provides an unobstructed view on the city below. In fact, on a clear day, the view will extend over 50 miles and across four states. Make sure to check the weather before booking your ticket!

On the slow elevator ride to the top, you will be provided with a short film detailing the 45-year history of the Willis Tower and Chicago’s other architectural wonders.

If you’re afraid of heights, beware! This glass box has a transparent floor that looks straight down.

If you’re a foodie, schedule your trip to Chicago ASAP! Chicago offers a variety of bold flavors (and huge portions) that your taste buds will never forget.

A staple in the diets of all Chicagoans is the Chicago Dog. This isn’t your typical backyard hotdog. A quintessential Chicago Dog consists of an all-beef frankfurter, bright green relish, fresh chopped onions, juicy tomato slices, a kosher pickle spear, a couple of spicy peppers, a dash of celery salt, and a squirt of yellow mustard all confined in a steamed poppy seed bun. That’s a mouthful!

You also can’t miss out on Chicago-style pizza. Chicagoans scoff at New York thin slices because, in Chicago, they do it big. Chicago deep-dish pizza is more reminiscent of a casserole than your typical pizza. How deep? About two inches. In fact, a deep-dish pizza can weigh up to four pounds!

Finding the best spots in a new city can be a challenge. Luckily, there are many tours available to help you find the go-to spots.

Take In the Art Institute of Chicago

Founded in 1879, the Art Institute of Chicago is one of the world’s oldest and largest art museums. Approximately 1.5 million people visit the museum every year, enjoying some of its most iconic offerings such as Georges Seurat’s “A Sunday on La Grande Jatte,” Pablo Picasso’s “The Old Guitarist,” Edward Hopper’s “Nighthawks,” and Grant Wood’s “American Gothic.”

The more you explore the vastness of this museum, the further you’ll become impressed with its curations. The Art Institute of Chicago has the largest collection of Impressionist and Post-Impressionist paintings outside Paris, with more than 30 paintings by Monet and works by Cézanne, Renoir, van Gogh, and Toulouse-Lautrec.

For fans of modern art, you can find the works of Jackson Pollock, Warhol, Jasper Johns, and Matisse. Even a modern architecture collection displays drawings and models by Frank Lloyd Wright and Le Corbusier.

You can also marvel at artifacts from ancient Greece, Egypt, and Rome. The Art Institute of Chicago is truly one of the most impressive curators in the world.

Affectionately known as “Chicago’s front yard,” Grant Park is the city’s foremost open space. Its 319 acres contain many of Chicago’s most popular attractions, including the Art Institute of Chicago, the Museum Campus Chicago, and Soldier Field, home of the Chicago Bears.

One of Grant Park’s most alluring attractions is Cloud Gate, more commonly known as “The Bean.” This reflective sculpture is the most photographed structure in the Midwest. Located in Millenium Park (a section of Grant Park), you can spot many other incredible displays of modern art and architecture.

If you’re traveling to Chicago in July, the Taste of Chicago Festival cannot be missed. Hosted in Grant Park, this festival is the largest food event in the world.

Catch a Game at the Historic Wrigley Field

Even if you’re not a baseball fan, there’s a good chance you know Wrigley Field. First built in 1914, the Chicago Cubs continue to play all of their games at this legendary stadium. That makes it the second-oldest ballpark in Major League Baseball!

No matter who you root for, you are sure to be amazed by Wrigley Field’s old school charm with a modern twist; the city revitalized the area in the last few years, adding a nearby hotel, mixed-use district, ballpark pavilion and more. Sitting in the middle of a residential neighborhood with no parking lot, there are few other ballparks like Wrigley Field. The Cubs continue to use its iconic manual scoreboard.

Come see the Cubbies in action and enjoy a Chicago Dog amidst the Lake Michigan breeze. What could be more Chicago than that?

Chicago is a fun and upbeat city, but it’s not without a gloomy past. Gangsters like Al Capone, Bugs Moran, and John Dillinger ran Chicago’s many criminal enterprises and remain household names today. Now that their terror is long in the past, we can’t help but be fascinated by them.

Lucky for you, there are several tours of Chicago’s neighborhoods that served as the battlegrounds for the deadly gang wars that occurred in the 1920s and 30s. This includes the site of the Valentine’s Day Massacre as well as the Biograph Theatre, where Dillinger was gunned down by FBI agents.

Spanning along the Chicago River, the Chicago Riverwalk is a 1.25-mile path that offers incredible views of Chicago’s waterfront architecture and public art. From the Wrigley Building to installations like Ellen Lanyon’s Riverwalk Gateway, this is no ordinary stroll.

Like many of Chicago’s public offerings, the Riverwalk is a feat of urban planning. It’s made up of six coves, each including their own set of offerings. In fact, if you’re looking for the perfect date night, look no more. The Riverwalk includes terraces stepping down to the water, restaurants, bars, beautiful views, and everything else you need for a romantic evening.

If you’re not keen on walking, hop on one of the cruises or water taxis. You can even rent a kayak or take a “cycleboat” tour.

Chicago has produced some of the world’s most loved comedians, and they all come from one legendary comedy club and improv theatre: Second City Chicago.

Second City offers three stages: the “Mainstage” and “e.t.c. Stage” for sketch comedy and improv acts, and the UP Comedy Club for stand-up. No matter what show you see, you may witness the rise of a future star.

This is not your average pier. Navy Pier is a massive, multifaceted visitor attraction that extends the length of six city blocks over Lake Michigan. The Pier has undergone a revitalization in the past few years and now features a luxury hotel, upscale restaurants, and a new and improved 200-foot Ferris wheel.

What will you find within Navy Pier’s 50 acres? A better question is, “What won’t you find at Navy Pier?” Children and adults alike will take pleasure in the multisensory Funhouse Maze and the Centennial Wheel. In fact, the Centennial Wheel provides one of the best panoramic views of Chicago and Lake Michigan.

Other activities include a botanical garden, the non-profit Chicago Shakespeare Theatre, and countless shops and restaurants. During the summer months, you can enjoy live music at the Miller Lite Beer Garden and watch fireworks light up the night sky.

HearHere Is Ready for Your Next Chicago Road Trip

Want to learn more about Chicago for your next road trip? Are you looking for something to listen to on the ride to the third largest city in the U.S.? Download HearHere and explore what makes Chicago the “Paris of the Midwest.” We curate content based on your interests – from sports to history to local culture – and package it into a high-quality “roadtrip companion” you can access at any time, so you don’t miss a thing.

Things do to along the Chicago Riverwalk | Timeout.com