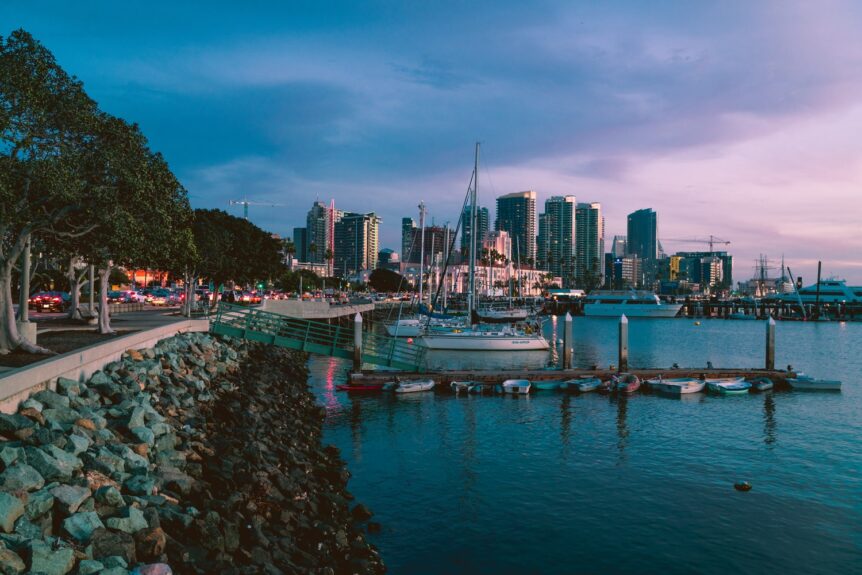 While San Diego is commonly referred to as the “Birthplace of California,” it is the birthplace of the Western United States as a whole. Historically home to the Kumeyaay people, Spanish explorer Juan Rodríguez Cabrillo landed in San Diego in 1542. He was the first European to visit and settle the West Coast.

Today, San Diego is as beautiful as it is bustling. The second biggest city in California boasts fantastic weather, some of the most picturesque beaches in the state, and plenty of history and culture to explore.

Here are HearHere’s favorite things to do in the gorgeous city of San Diego:

Your trip to San Diego will very likely include more than one visit to the famed Balboa Park. Not only are there tons of activities in this historic 1,200-acre park (some even have their own entries on the list), but its serene beauty and natural vegetation zones are an excellent complement to San Diego’s amazing weather.

Balboa Park also features tons of museums. In fact, Balboa Park has more museums than you can possibly visit in a day! You can try, though, and the best way to is with a Balboa Explorer Pass. With the option to add admission to the zoo, this pass allows you admission to all of Balboa Park’s museums and attractions.

Commissioned in 1945, the USS Midway served in both the Vietnam War and Operation Desert Storm, becoming the longest-serving aircraft carrier in the world. Permanently docked at San Diego’s Embarcadero, this legendary vessel is now the largest museum in the world dedicated to aircraft carriers and naval aviation.

On the Midway, you will be able to get up-close and personal with 30 restored aircraft, including eight propeller planes, 14 jets, and eight helicopters. You’ll also be able to see the galley, brig, sleeping quarters, pilot ready rooms, and engine room. Tours include stories from veterans who served on the Midway.

You can even get in on the action by experiencing flight simulators and taking pictures in the cockpits of planes. The Midway offers you the unique opportunity to stand where history occurred.

Point Loma was the initial landing point of explorer Juan Rodriguez Cabrillo in 1542. You can take in a beautiful view that overlooks San Diego and discover the history of the area.

Since the 19th century, Point Loma has had a military presence due to its advantageous geography. A part of this presence is the 77.5-acre Fort Rosecrans National Cemetery. Established in 1882, this cemetery has over 100,000 graves and memorials.

For lighter fare, head to the marina for some unmatched San Diego whale-watching. At Osprey Point, you can marvel at the daring climbers who scale the jagged rocks. Point Loma also offers amazingly diverse tidepools.

At Ellen Browning Scripps Park, you can enjoy a serene picnic and appreciate the beauty of San Diego’s coast to its full scale. During the summer months, you can even catch live music and fireworks.

If you make the trip out to La Jolla, we strongly encourage a detour to the Legends Gallery on Prospect Street. There, you can find original art by former La Jolla resident Theodor Seuss Geisel, better known as Dr. Seuss.

La Jolla also offers one of the best beaches for children. Childrens’ Pool Beach in La Jolla is shielded from the dangerous waves thanks to a concrete wall built nearly a century ago.

In addition to families and children, seals and sea lions also love this beach. From December to May, they come to relax in the gentle waters and give birth to their pups on the beach. While access to the beach is discouraged during this season, you can still get an up close look at the new parents and their babies.

One of the best ways to soak in San Diego’s culture is to ride its world-renowned waves. A beach community from its genesis, San Diego boasts over 70 miles of open ocean coastline. As a result, there’s too many incredible surf spots for us to list.

Some of the best spots for beginners include La Jolla Shores, Tourmaline Beach, and Ocean Beach. No matter where you go, almost every spot will have ample gear rentals and available lessons.

If you prefer to stay dry, get yourself a lounge chair and enjoy the beaches. You can even watch the surfers from the shore!

While San Diego is a bustling urban city, it also preserves some of its historic roots. San Diego’s Old Town is a neighborhood that contains the San Diego Mission and Presidio––the first two European settlements on the Western Coast.

The State Historical Park in Old Town is a time machine to the 19th century. One of the many historic buildings in this time capsule is Casa de Estudillo from 1827, one of the oldest remaining pieces of Spanish architecture in California.

Take in Old Town’s history via its beautifully preserved architecture, artisanal shops, and several museums. It is an experience that cannot be missed.

You may have a zoo near you, but there are few zoos quite like the San Diego Zoo. With nearly four million yearly visitors, this zoo is not only the most visited zoo in the U.S., but is widely considered to be one of the best zoos in the world.

What makes the San Diego Zoo so great? First, it was a pioneer in the concept of cageless exhibits. The exhibits in San Diego Zoo feature open-air enclosures that match each species’ native environment. The diversity of San Diego’s habitats include rainforests for the gorillas, free-flight aviaries for their birds, and Arctic tundra for their polar bears. Some animals even roam the grounds freely (don’t worry, not the tigers).

On top of all that, the San Diego Zoo is a leader in wildlife conservation, preservation, and rehabilitation. This zoo is truly unique in its mission to protect animals rather than exploit them.

Until 2019, the San Diego Zoo was famous for being one of the only zoos in the United States to house Giant Pandas. While those pandas were returned to China, there are still over 650 species that call the San Diego Zoo home.

If you’re done with sightseeing and want to enjoy San Diego’s culinary offerings and nightlife, look no further than the Gaslamp Quarter. This 16-block stretch in downtown San Diego is home to some of the best restaurants and bars in San Diego.

In the Gaslamp Quarter, you can try a local beer from a craft brewery, enjoy fresh fish tacos at one of more than 100 sidewalk restaurants, and sip on cocktails on a rooftop lounge.

Located adjacent to Petco Park and the Convention Center, this strip is especially popping on game days and during San Diego’s iconic Comic-Con. You can also expect large street parties for Mardi Gras and St. Patrick’s Day.

San Diego has so many great attractions and sights; it’s hard to get them all into one list.

Here are just a few more places worth mentioning if you’re making a trip to San Diego:

HearHere Is Ready for Your Next San Diego Road Trip

San Diego is a one-of-a-kind city with world-class weather, attractions, sights, and history. From the Maritime Museum of San Diego, to Balboa Park, to the Gaslamp Quarter, San Diego has something for everyone.

Want to learn more about San Diego for your next road trip? Are you looking for something to listen to on the ride there? Download HearHere and explore what makes San Diego a laid-back destination for travelers of all ages.

We curate content based on your interests – from sports to history to local culture – and package it into a high-quality “road trip companion” you can access at any time, so you don’t miss a thing.

10 Best Things to Do in Point Loma | TripSavvy.com