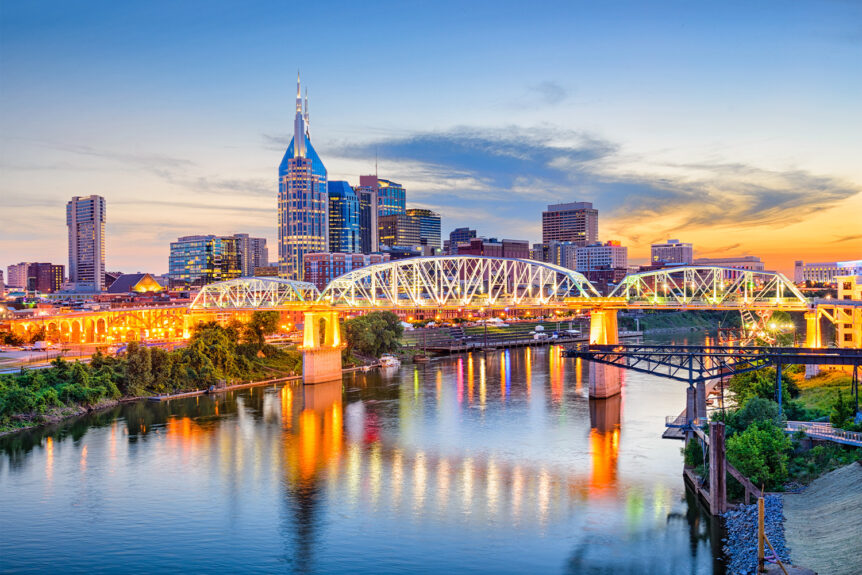 The capital of Tennessee picked up the nickname “Music City” due to its extensive musical history. A significant landmark in the birth of country music, Nashville also hosted such legendary artists as Elvis Presley, Bob Dylan, and Paul McCartney. Today, artists of all musical genres travel from across the world to record in Nashville. Why? Because no other city offers the vibrance and culture of Nashville.

Walking through downtown Nashville, you’ll pass unforgettable eateries, hoppin’ bars, unique attractions, and historical music venues that host many of your favorite artists and musicians. Nashville’s prime location positions it near some of the nation’s most beautiful outdoors.

The main strip of Nashville’s downtown area, Broadway, is the beating heart that keeps Nashville alive.

During the day, this area provides some of Nashville’s best restaurants and boutique shops. Grab a traditional hot chicken sandwich and get fitted for a pair of cowboy boots. You may need those boots by nightfall.

When the sun sets, Broadway and its surrounding neighborhoods transform into something truly special. Neon signage lights up bars, saloons, and honky-tonks as far as the eye can see. Slip on those boots and get yourself to the dance floor!

What sets Broadway apart from anywhere else in the world is its concentration of music venues. As you walk down Broadway, live music will cascade upon you as it leaks out the doors of countless venues. Accept the invitation, and enjoy some Tennessee whisky as you listen to the sounds of Nashville.

Check Out the Grand Ole Opry

While Nashville’s music scene is best enjoyed on Broadway, which features established artists and rising stars alike, you don’t want to miss out on the Grand Ole Opry.

Widely known as “the show that made country music famous,” this weekly concert has been running for almost 100 years, featuring the latest and greatest in country, folk, gospel, and bluegrass music. This legendary show has also been known to feature skits, comedy routines, and other live performances.

Before the show, you can take a tour of the storied venue. After, grab some grub at the delicious Opry Back Porch BBQ.

If you’re traveling with children, this is an excellent choice for the whole family as it provides a more relaxed vibe than Broadway.

If Athens is your dream vacation, Nashville is the next best thing!

Located in Centennial Park, Nashville has a full-scale replica of Athen’s marvelous Parthenon. Built in 1897, over 2,000 years after the original Athenian structure, Nashville’s Parthenon also features a 42-foot high statue of Athena.

You can admire the wondrous ancient architecture from both the inside and out. Inside Nashville’s Parthenon, you’ll see 63 paintings from 19th- and 20th-century American artists. Occasionally, Nashville’s own theatre companies will perform Greek plays on the Parthenon’s steps.

Why is there such a thing in Nashville?

Before Nashville was known for country music, it was regarded as the “Athens of the South” because of its high concentration of universities. The City of Nashville decided to celebrate that.

While this is not a lengthy excursion, you can make an afternoon of it by packing a picnic, lacing up your walking shoes, and enjoying the serene beauty of Nashville’s Centennial Park. Maybe even take an afternoon nap after a long night of honky tonkin’.

Marvel at the Gaylord Opryland Resort and Convention Center

With popping nightlife, incredible food, and unforgettable shows and entertainment, Nashville might be Vegas’ biggest competitor. The Gaylord Opryland Resort and Convention Center certainly cements that, as this monstrosity seems like it came straight from the Vegas strip.

Boasting nine acres of airy, indoor garden atriums, 750,000 square feet of flexible meeting space, a wide selection of award-winning restaurants and bars, and a world-class spa, this is not your average hotel. Even if you’re not staying at this luxury resort, you can enjoy its incredible atmosphere and diverse amenities.

This resort has something for everyone, from taking a boat tour of its indoor jungle to browsing its wide selection of shops. If you’re visiting during the holiday season, be sure to check out its wondrous of over three million Christmas lights.

You can’t visit Nashville without fully embracing its vibrant music scene. While Broadway is where the action happens, Music Row is where it all begins.

Packed with recording studios, radio towers, record labels, and production companies, Music Row is truly the heart and soul of not just Nashville’s music scene but the nation’s music industry as a whole.

There are tons of tours available for visitors. One of the many points of interest is the historic RCA Studio B, where the “Nashville sound” was born. There, you can tour the studio where such artists as Dolly Parton, Jim Reeves, and Willie Nelson recorded their most iconic hits. You can also tour Columbia’s Quonset Hut Studio, which hosted the likes of Johnny Cash, Elvis Costello, and Simon & Garfunkel.

Music Row is also central to plenty of shops and restaurants, so you can make a day of it. Get tickets to a show and then go out for a night on the town!

Stargaze at the Vanderbilt Dyer Observatory

Owned and operated by Vanderbilt University, the Vanderbilt Dyer Observatory is one of the biggest astronomy centers in Tennessee. Built on a large hill, it provides clear, unobstructed views of Nashville’s beautiful night sky.

For the astronomically curious, there are telescopes available for public use. You can leave Nashville having learned something about our solar system.

And, because it’s Nashville, the surrounding grounds often host outdoor concerts. When the show is over, observatory staff will bring out telescopes so you can get an intimate look at the moon. This makes for a perfect Nashville night under the stars.

This legendary purple building in downtown Nashville is the oldest Honky Tonk bar in Nashville. There’s no better place to put back a drink and take in some of Nashville’s best music.

Country legends Patsy Cline and Waylon Jennings were frequenters of this establishment, so you can enjoy the show where they once sat. Tootsie’s is also where Willie Nelson got his first gig.

You can participate in making history as Tootsie’s is as influential today as it was then. You may even get to witness a star in the making!

Breathe In the Fresh Air at Radnor Lake

While Nashville is known for its bustling urban environment, it also offers some of the most serene nature in the Southeast.

With glistening water that calmly laps against sandy shores and jagged rocks, you will truly feel at peace in the scenic Radnor Lake.

Wildlife is abundant, as you will be sure to spot turtles waddling in the dirt, deer jumping between trees, and red-tailed hawks soaring above. This oasis is the perfect escape from the hustle and bustle of Nashville.

While swimming in the lake is prohibited due to its protected status, you can still embark on guided canoe trips in the springtime. Once you get a glimpse of the beautiful water and its surrounding nature, you will have no choice but to jump into a vessel.

Walk Among Legends at the Country Music Hall of Fame

Whether or not you’re a fan of country music, you don’t want to miss Nashville’s Country Musical Hall of Fame and Museum. Boasting one of the largest musical collections on the planet, this institution is one of the largest museums in the world dedicated to the preservation and interpretation of American music.

You can also marvel at their collection of vehicles, including Elvis Presley’s 1960 “Solid Gold” Cadillac limousine, Webb Pierce’s 1962 Pontiac Bonneville convertible, and Jerry Reed’s 1980 Pontiac Trans Am from “Smokey and the Bandit II.”

In addition to archived footage of famous performances and interviews, you can also tour the historic RCA Studio B, where just about every country legend recorded.

This building is without a doubt an archive of what makes Nashville so great.

Nashville has so many great attractions and sights, it’s hard to get them all into one list. Here are just a few more places worth mentioning if you’re making a trip to Nashville:

HearHere Is Ready for Your Next Nashville Road Trip

Nashville may be well-known for honky tonks and Music Row, but the city has so much more to offer. From fine art to fine dining, Nashville is a historic Southern town with all the modern touches a seasoned traveler needs to make their trip one to remember.

Want to learn more about Nashville for your next road trip? Looking for something to listen to on the ride there? Download HearHere and explore what makes Nashville a gem of the South. We curate content based on your interests – from sports to history to local culture – and package it into a high-quality “roadtrip companion” you can access at any time so you don’t miss a thing.