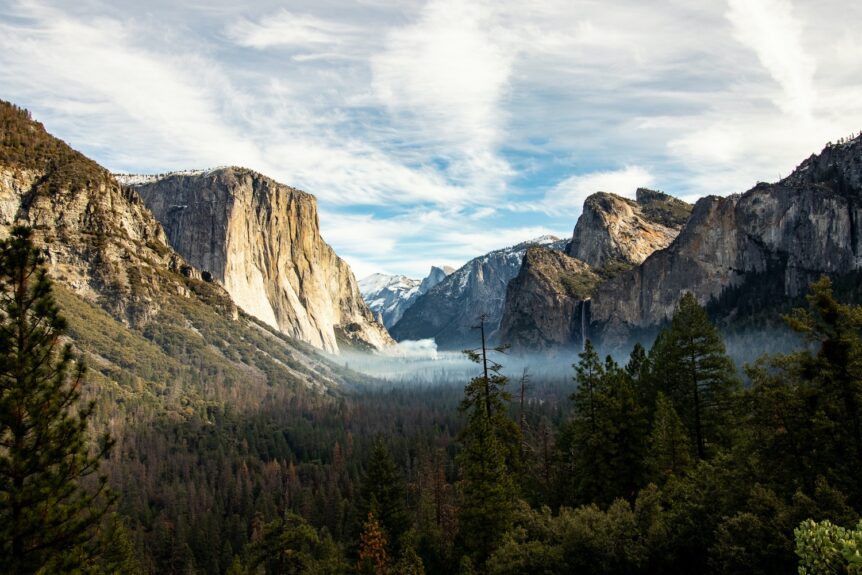 From jaw-dropping views to surreal animal encounters, the national parks of the United States offer opportunities that everyone should experience at least once in their life.

While the first U.S. national park was established in 1872, there are now 63 national parks across 30 states, each offering its unique beauty to more than 84 million yearly visitors. If you’re looking for an escape from the daily grind, there is truly nowhere more serene than one of the national parks.

If you want to visit your first national park or check another off the bucket list, the options can be overwhelming. Fortunately for you, it is impossible to choose wrong. Each national park offers an experience that you will never forget. Nonetheless, we at HearHere want to help you make your choice.

Whether your goal is to climb mountains, hike deserts, or swim oceans, your perfect national park is out there. Check out our favorite national parks and how each one could be the right fit for you.

On top of its historical significance, Yellowstone is breathtakingly beautiful, spanning over 2.2 million acres across Wyoming, Montana, and Idaho. From its rocky mountain ranges to sprawling plains, Yellowstone hosts an incredible diversity of geographic features. Among the most unique of Yellowstone’s natural wonders are its geothermal geysers and hot springs.

Perhaps you’ve heard of Old Faithful? This geyser is named for its regular eruptions that produce up to 8,400 gallons of boiling water and reach heights of nearly 200 feet.

Another attraction that cannot be missed is Yellowstone’s awe-inspiring herds of bison. In fact, Yellowstone is the only place in the United States where bison have lived since prehistoric times. While overhunting nearly rendered bison extinct in the 19th century, Yellowstone has worked to maintain the country’s largest population of Bison.

California’s most visited national park, Yosemite, is an oasis of natural beauty and playground for outdoor adventurers. Located in the Sierra Nevadas, Yosemite offers countless options to all of its visitors.

A seven-mile (round trip) hike up Yosemite Falls will give you an up-close to the park’s largest waterfall. If that’s not intense enough for you, look no further than Half Dome. Named after its distinct shape, this 16-mile hike will give you the best view in California.

If climbing isn’t your thing, no need to worry. Yosemite has plenty to offer. There are many more accessible hikes and cycling, fishing, tours, and many other outdoor activities. No matter where you go, it will be impossible to escape the beautiful views.

If you’re lucky, you may even be able to watch a rock climber in action. Some of the world’s most daring professional rock climbers travel to Yosemite to climb such treacherous rock formations as El Capitan.

Situated in Arizona, this national park hosts one of the seven natural wonders of the world. More than 277 miles long and up to 18 miles wide, the Grand Canyon is so magnificent that you must see it in person. Even then, you still might not be able to process its scale!

Nearly two billion years of Earth’s geological history have been exposed as the Colorado River and its tributaries cut their channels through layer after layer of rock for six million years. The Colorado River continues to deepen and widen the canyon to this day.

For thousands of years, the area was continuously inhabited by Native Americans, who built settlements within the canyon and its many caves. The Pueblo people considered the Grand Canyon a holy site and made pilgrimages to it.

This wondrous park offers endless hikes up, down, and around the canyon. You can even ride a mule to the bottom of the canyon! Once there, you can take a raft down the Colorado River, which runs through the entirety of the canyon.

Located 70 miles off Key West in the Gulf of Mexico, this hidden gem comprises seven islands. However, what makes Dry Tortugas so unique is that its 100 square mile area is mostly open water. In fact, it can only be reached by boat or seaplane, making it a perfect destination if you’re looking to avoid crowds.

In addition to picturesque blue waters, Dry Tortugas is home to vast coral reefs that host a diversity of marine life. You can get up close and personal with the underwater flora and fauna by snorkeling and scuba diving.

Dry Tortugas also protects Fort Jefferson, the largest brick masonry structure in the Americas. Fort Jefferson was utilized by the U.S. Military as both a stronghold and prison from the Civil War to World War I. While Franklin D. Roosevelt designated the area as a national monument in 1935, it officially became a national park in 1992.

One of Utah’s five national parks, the unique beauty of Zion is defined by its pink Navajo sandstone cliffs and orange slot canyons. This colorful landscape offers some of the most picturesque hiking in the world.

The most popular hikes in Zion traverse through The Narrows. These paths weave through the floor of the Zion Canyon, which was carved out over millions of years by the Virgin River. Today, the canyon is nearly 2,000 feet deep.

Zion also offers one of the most diverse landscapes in the country, ranging vastly between terrains and elevations. As a result, the park is home to 79 mammals, 32 species of amphibians/reptiles, 8 species of fish, and 289 species of birds. Look out for the Mexican Spotted Owl, Mojave Desert Tortoise, and California Condor––just a few of Zion’s rarest species.

Straddling the border of Tennessee and North Carolina in the Appalachian Mountains, this over-500,000 acre plot of serene beauty is the most visited national park in the U.S.

The most popular hike in the Great Smoky Mountains is Clingmans Dome, and for a good reason. This 6,643-foot peak is the highest point in the park and the entirety of Tennessee.

The Great Smoky Mountains are also full of vibrant Appalachian history. Today, more than 90 historical buildings remain in the park. In Cades Cove, you can walk through churches, cabins, and mills dating back to the early 19th century. Additionally, you can find stone walls, chimneys, foundations, and other remnants of past residents throughout the park.

Named after its glacier-capped peaks that soar above shimmering alpine lakes and green sub-alpine valleys, Glacier National Park offers something truly unique. Located in Montana, this park is one of the only places in the lower 48 states where you can see some of the planet’s rapidly receding glaciers.

In addition to hiking and cycling, one of the best ways to check out these massive glaciers is to raft through the unbelievably blue waters. For the thrill-seekers out there, you can elect to raft down some of Glacier’s white-water rapids.

While Colorado is known for its impressive mountains and lush forests, Great Sand Dunes National Park is more reminiscent of the Sahara Desert. Adding to the beauty of these vast dunes, though, are the Rocky Mountains in the background.

These sand dunes are the tallest in North America and are the centerpiece in a diverse landscape of grasslands, wetlands, forests, alpine lakes, and tundra. Therefore, you can experience the greatest diversity of terrain in the country!

While you’ve probably dreamed of snowboarding in Colorado, you probably haven’t thought of sandboarding. That’s right—you can board and sled down the largest sand dunes in the country.

If that’s not quite your speed, the sand has a lot more to offer. In fact, spending a night in the dunes will provide one of the best stargazing experiences of your life. This comes as a result of dry air, little light pollution, and high elevation.

America’s national parks hold wonder and adventure for anyone bold enough to step outside their comfort zone. Are you looking for something to listen to on your next national park road trip?

The origin stories of our national parks are rich and captivating tales, much like the dramatic origins of Smokey the Bear’s national park set aside in his memory.

Download HearHere and explore what makes America’s national parks unique destinations for outdoor enthusiasts and history buffs alike. We curate content based on your interests – from sports to history to local culture – and package it into a high-quality “road trip companion” you can access at any time, so you don’t miss a thing.

These are the 10 oldest national parks in the United States | 10Best.com

Most Popular Hikes in the Smoky Mountains |  VisitMySmokies.com