11 Things to do in San Francisco 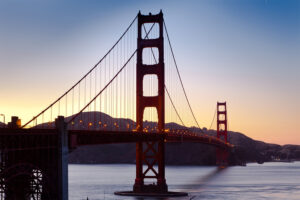 San Francisco is a city that has been shaped by an immensely rich history, offering endless possibilities to residents and tourists alike. First settled in 1849 by ambitious gold miners from across the country, the San Francisco Bay Area is now the world’s tech capital, hosting the headquarters of such companies as Google, Facebook, and Apple.

Between these unique periods along San Francisco’s diverse timeline exists a colorful story. From the escaped prisoners of Alcatraz to the Summer of Love, San Francisco, known simply as “The City” to Bay Area residents, is one of the most culturally rich cities on the West Coast. On top of that, San Francisco’s array of attractions are packed into just 47 square miles, making it extremely accessible to its visitors.

Whether you’re planning your trip or just daydreaming, our guide to San Francisco will surely make you eager to visit Golden Gate City.

Walk Across the Golden Gate Bridge

Needing no introduction, San Francisco’s Golden Gate Bridge is the city’s most popular attraction and the most famous bridge in the world. In fact, this breathtaking marvel is said to be the most photographed structure of today.

At the time of its opening in 1937, San Francisco was both the world’s longest and tallest suspension bridge, being declared one of the Wonders of the Modern World. Today, San Francisco’s defining symbol is crossed by 120,000 motorists every day, linking Marin County to The City.

You can join the action by walking or cycling across its 1.7-mile span. Don’t forget to take a picture from the Marin Headlands before heading back!

First introduced to San Francisco in the 19th century, cable cars have remained a stable means of transportation for both residents and tourists. These iconic rail cars provide a taste of San Francisco’s history and amazing views of the iconic hills.

Despite being the tech capital of the world, The City still has its old-school ways!

Serve Your Time on the Rock

On a small island in the San Francisco Bay rests the most infamous prison of all time––Alcatraz. Now defunct and operating solely as a museum, Alcatraz once imprisoned some of history’s most dangerous criminals. Al Capone, George “Machine Gun” Kelly, and James “Whitey” Bulger are just a few of Alcatraz’s most notorious former residents.

Nearly two miles from land, nearly many prisoners attempted to reach freedom by swimming the Bay’s treacherous waters. Lucky for you, you can take a ferry from Pier 33. Advance reservations are recommended.

Take In the Sights and Sounds of Pier 39

Pier 39 runs along San Francisco’s famous Fisherman’s Wharf ––a bustling waterfront marketplace. In addition to some of The City’s most delicious seafood offerings, Pier 39 hosts thrilling rides, a recurring magic show, and the Aquarium of the Bay.

Perhaps Pier 39’s most popular attraction is its West Marina. Since 1990, a community of roughly 900 boisterous sea lions has camped out each winter on the docks. Enjoy watching these water dogs bark, play, and bask in the sun.

Have a Picnic in the Park

San Francisco’s most famous park is none other than Golden Gate Park. Larger than even New York’s central park, Golden Gate Park offers over 1,000 acres of sprawling green space and several attractions throughout it, such as a carousel and several lakes.

In 1967, San Francisco hosted the Summer of Love. During this time, over 100,000 hippies descended upon San Francisco’s Haight-Ashbury neighborhood. Such musicians as Janis Joplin, the Grateful Dead, Jefferson Airplane, and George Harrison played free shows on Golden Gate Park’s “Hippie Hill.” Today, improvised drum circles form on the weekends where people come together and fill the hill with a constant beat for hours on end.

One of San Francisco’s defining traits is its cultural diversity. Throughout the city, you can find a multitude of neighborhoods that beautifully display the cultural and San Franciscan history of several ethnic groups.

Among these neighborhoods is the Mission District, an oasis of San Francisco’s Latino culture. There, you will find beautiful murals across the walls and some of the best taquerias in Northern California.

San Francisco is also home to one of the country’s most famous Chinatowns. Upon walking through the “Dragon’s Gate” on Grant Avenue and Bush Street, you will witness 24 blocks of pure energy. Exploring this bustling area on foot is recommended, as you can pop in and out of authentic food markets, renowned restaurants, traditional herb shops, and remarkable temples.

Additional cultural hubs of San Francisco include North Beach, the city’s Italian quarter and home to Coit Tower, and the Castro District, the country’s first gay neighborhood and a remaining hub for LGBTQ+ activism and events.

Take in the Arts

In addition to its beautiful history, San Francisco is home to a variety of artistic offerings that you cannot miss. The Orpheum Theatre is home to some of the world’s most renowned plays and musicals. For the more artistically adventurous, check out San Francisco’s avant-garde theatres and internationally recognized symphony, opera, and ballet companies for the more artistically adventurous. Trust us, dinner and a show is the perfect way to cap off a day of sightseeing.

The city also offers a variety of breathtaking museums. The San Francisco Museum of Modern Art, the Asian Art Museum, the de Young Museum, the Legion of Honor, and the Contemporary Jewish Museum are just a few of San Francisco’s institutions dedicated to the finest of classical and contemporary arts.

Perhaps the most impressive of San Francisco’s museums is the California Academy of Sciences. This incredible institution is the only place in the world to host an aquarium, planetarium, natural history museum, and a four-story rainforest, all under one roof. Plan to spend almost an entire day here, because you won’t want to leave!

Many things make San Francisco one of the most quirky cities in the world, but the most famous is none other than Lombard street. Known as the “crookedest street in the world” and seemingly designed by Doctor Seuss, this street is infamous for its steep, one-block section with eight hairpin turns.

Another addition to San Francisco’s quirky beauty is the “Painted Ladies.” These seven brightly painted Victorian homes near Alamo Square are known as “postcard row” due to their uniquely breathtaking beauty.

Once a 1,500-acre military post, the presidio is an outdoor recreation hub, home to forested areas, miles of trails, a golf course, and scenic overlooks. The presidio is also home to rich history of culture. Check out the Civil War-era Fort Point, the Walt Disney Family Museum, and Lucasfilm’s headquarters with its famous Yoda Fountain.

If you’re looking to spend a day outside the city limits, look no further than Muir Woods. Just across the Golden Gate Bridge on Mount Tamalpais, known to locals as Mount Tam, this National Monument protects 240 acres of old-growth coast redwood forests. The tallest redwood tree in Muir Woods reaches a whopping 258 feet and is over 1,500 years old!

Don’t forget to take a picture with one of Northern California’s signature banana slugs.

Cap the Day off With Something Sweet

Today, Ghirardelli Square is home to the Ghirardelli Chocolate Factory and dozens of specialty shops. If you have a sweet tooth, you won’t be able to resist one of Ghirardelli’s renowned sundaes following a tour of their factory.

HearHere Is Ready for Your Next San Francisco Road Trip

Want to learn about San Francisco for your next road trip? Are you looking for something to listen to on the ride there? Download HearHere and explore what makes San Francisco “The Golden City.” We curate content based on your interests – from sports to history to local culture – and package it into a high-quality “road trip companion” you can access at any time, so you don’t miss a thing.