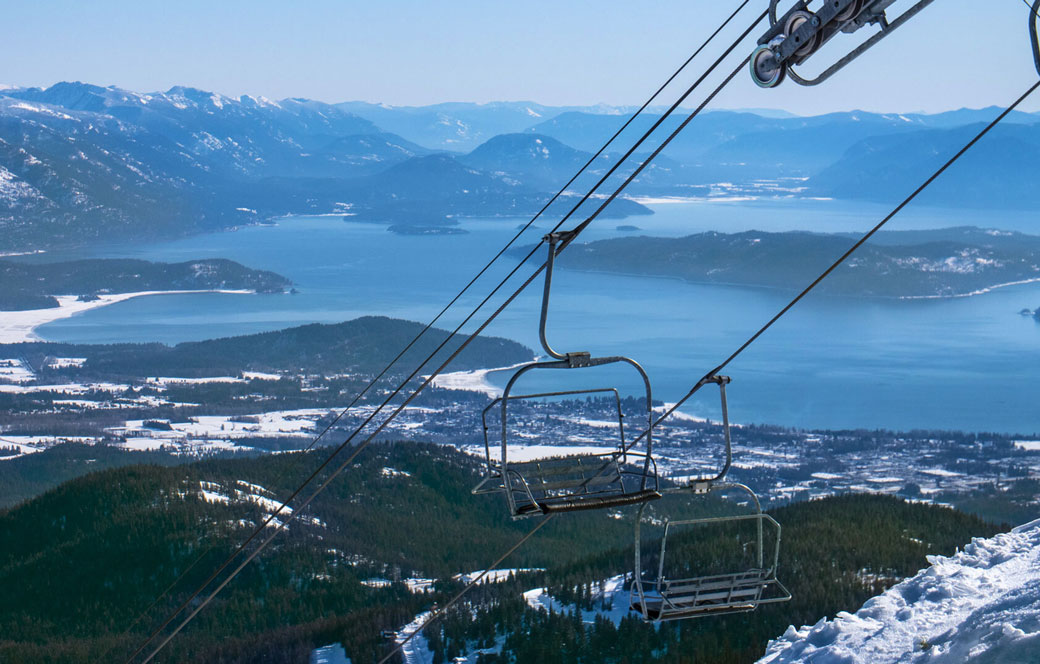 For AAA members in the Pacific Northwest, during this time of year, road trips likely mean ski and snowboard escapes! So with that in mind, let’s get out of town, up into the snow, strap our boots on and play for the day. Where to? This time we’re heading from Spokane to Schweitzer!

On our way to Schweitzer, we careen past the largest town in the Idaho “Chimney”, Coeur d’Alene. The city is named after the Coeur d'Alene people who lived in this area for uncounted centuries and untold generations. For thousands of years, the people camped along the shores of the lakes and streams, paddled canoes across their waters, and walked the forests and mountains of what is now north Idaho and eastern Washington. Throughout these years, the story of the Coeur d’Alene has been told in song and dance spoken in their own language. They shared it in celebration, in hardship, and through every cold and unforgiving winter. From old to young, their story has been kept alive through the generations. While HearHere hasn’t been around for generations — yet — we do have a vast collection of stories of Indigenous People across the country. As a HearHere subscriber, you’ll have access to our entire library, and you can listen to one of them on the Coeur d’Alene people here. 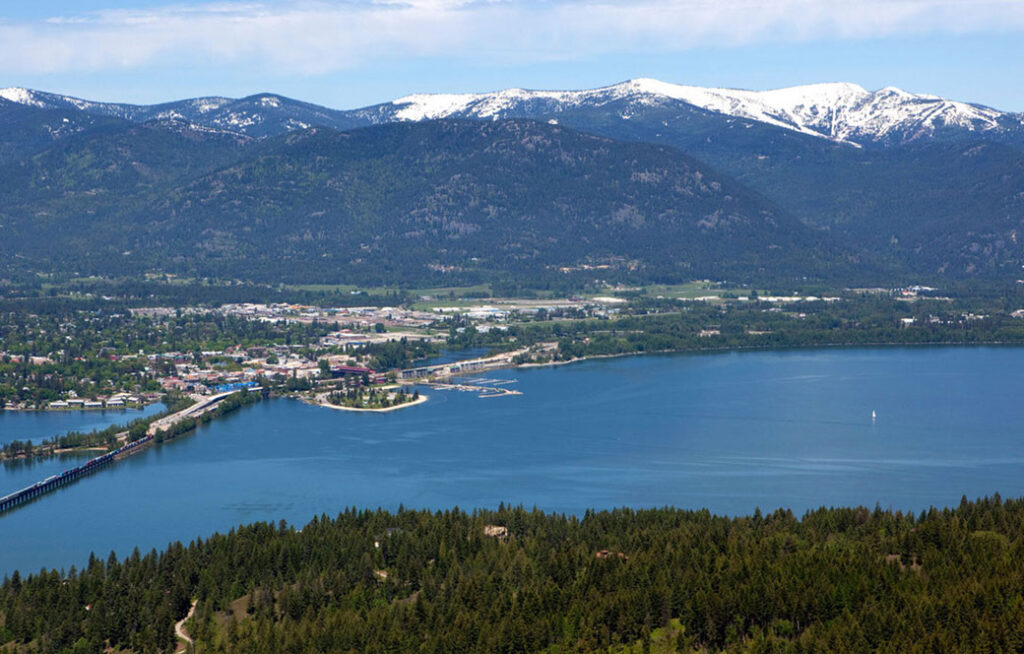 We’ll cross over the river on the 2-mile Sandpoint Long Bridge. This is actually the third version of the Long Bridge since the first one was opened to traffic in 1909. Some claim that it was the longest wooden bridge in the world at that time. The Wagon Bridge, as it was called then, used over a million board feet of local timber to build. It’s hard to imagine these days the importance of wood to the people here. The reality is that, next to food and water, the mighty trees in their forests were an essential staple for life and survival. Wood built and heated their homes. A typical settler’s homestead might easily burn through 20 cords of wood a year just for heating and cooking. Forests were also an early producer of jobs, as it continues to be today. It was a rough life being an early logger in these woods, and we’ve got a story about it here for you.

By the early 1900s, Idaho’s panhandle was providing much of the central United States with lumber. Even with major fires, like in 1910 — known as the largest in U.S. history — which destroyed tons of timber acreage, there was still an abundant supply to harvest. No official cause was ever listed for the Great Fire of 1910, yet that year was also the driest in anyone's memory. For two terrifying days and nights — August 20 and 21 — the fire raged across three million acres of virgin timberland in northern Idaho, western Montana, and roared across the rolling country of eastern Washington. In a matter of hours, fires became firestorms, and trees by the millions became exploding candles. Millions of more trees, sucked from the ground, roots and all, became flying blowtorches. Many thought the world would end, and for 86 fire victims, it did. It’s an incredible story — it’ll have your jaw dropping to your chin! Actually, we have tons of stories in our collection that’ll leave you fascinated, saying, “I didn’t know that.” Listen to this one here.

Nestled in a basin at the base of the foothills of the Selkirk Mountains — in Idaho’s Panhandle overlooking Lake Pend Oreille — Schweitzer Mountain offers 2,900 acres of lift-accessible, in-bounds terrain. There are a lot of quirky and fun facts about this part of the state, which fiercely clings on to its own identity — to the point that it’s even in a different time zone than the rest of Idaho. One of our hundreds of stories on the Gem State tells you all about it, and you can listen to it here. 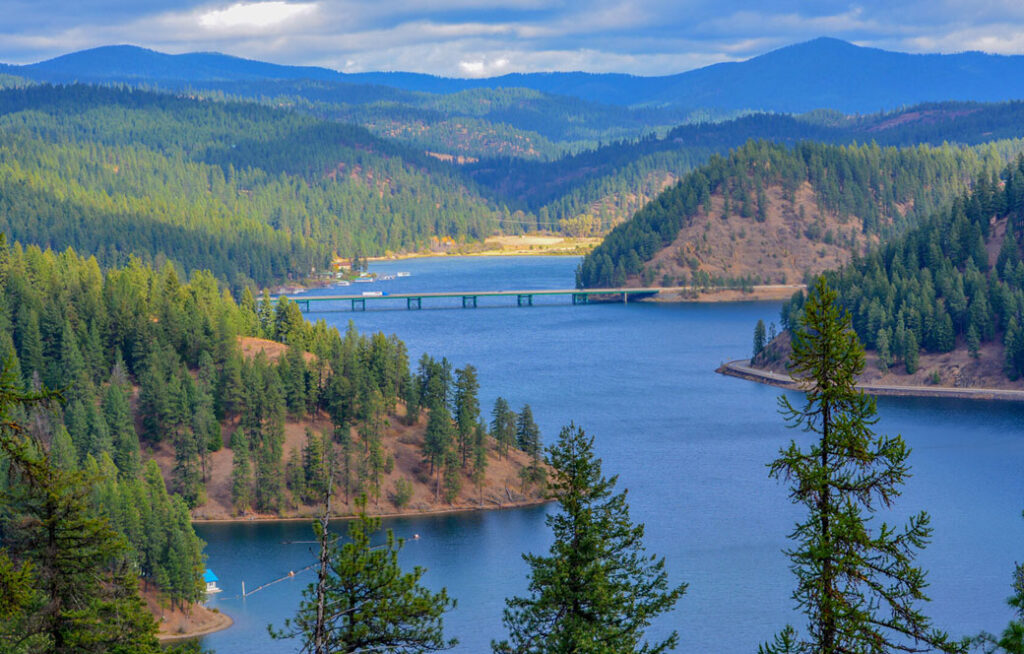 Ahhh… here we are, Schweitzer Mountain Resort. Considered by many as the best skiing destination in Idaho and the best family-friendly resort in the Pacific Northwest, Schweitzer ranks as one of the nation’s top winter destinations thanks to its two massive bowls and renowned tree skiing. Other activities for non-skiers — like an on-site spa, dining, and shopping — are all located in the intimate village. In summer, the resort offers a variety of activities including hiking, mountain biking, a zip line, climbing wall, trampoline jumping, and scenic chairlift rides. Schweitzer offers year-round accommodation on the mountain, from classic hotel-style rooms to full ski-in/ski-out condominiums. The history of Schweitzer dates back over a century ago when, as legend has it, a Swiss hermit lived at the bottom of a mountain not far from the town of Sandpoint. Little was known about the man, but locals began to refer to the mountain after him as "Schweitzer," which in German, means “Swiss man.” His is a pretty good story, and you can read about it here.

As we say, “every place has a story,” and we take pride in telling you those stories. This road trip is a great example. But you could take it a step further and also say that “now every story has a place,” and that place is at HearHere. In the words of HearHere co-founder Kevin Costner, “Our goal is simple: to draw you in and offer up the history of an area, unknown or forgotten. Our commitment to that idea, and specifically to the first people to inhabit this land, is a responsibility we not only feel, but pledge to start with.”

Images thanks to Getty Images.