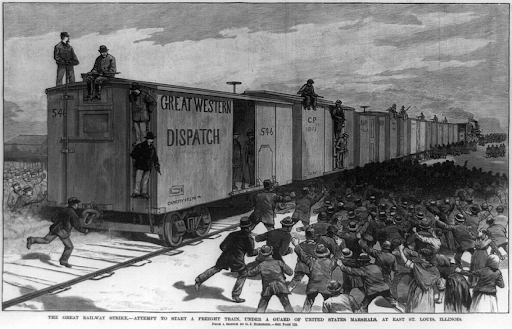 Beyond BBQs & Parades: The Long Struggle for “Labor Day”

The Great Southwest Railroad Strike of 1886 was a trade union strike involving more than 200,000 workers.

To many of us, Labor Day is best known as the "unofficial end of summer," a three-day weekend when Americans are wrapping up their vacations and -- in normal, non-Covid19 times -- looking ahead to fall activities that include going back to school and sports.

But digging deeper into the history of this commemorative first Monday in September, we learn this is an event that has grown to honor and recognize the American labor movement. Beginning in the late 19th century, as trade groups like the Central Labor Union and the Knights of Labor grew, they proposed "Labor Day" be set aside as a holiday. In 1887, Oregon was the first state of the United States to make it an official public holiday. By the time it became a federal holiday in 1894, 30 US states celebrated Labor Day. Today, all U.S. states and territories, and the District of Columbia have subsequently made Labor Day a statutory holiday.

“Labor Day” evolved from efforts to improve working conditions; an age-old quest in the United States. In fact, there were labor disputes in American long before the Revolutionary War, such as the 1636 fishermen's strike in Maine. Most worker revolts during this period were temporary and isolated, and rarely resulted in the formation of permanent groups of laborers for continued negotiation purposes.

Over the next generations -- throughout a series of starts and stops, and even riots -- by the 1930s, unions became important components to the overall betterment of workers. None of that progress, however, came easily, for, the very nature of organized labor created tensions between leading industrialists and their workers who rallied to gain workplace rights, better wages, working hours, political expression, labor laws, and overall improved working conditions.

Those tensions were heightened in the early 1930s, as the Great Depression and the Dust Bowl forced some one-and-a-third million people from the Midwest and Southwest into California. At its peak, in the fall of 1931, 1200-1500 migrants arrived each day in search of better living conditions.
The new influx of people found themselves competing not only with each other but also with locals in an environment where unemployment was already as high as 25%. This intense competition and desperation for work in Stockton, California led to a steep drop in agricultural wages, resulting in a strike that ignited the 500-member Agricultural Workers Union’s 1937 Spinach Riot.

This kind of violence was not new. Nearly 20 years earlier and farther north, in Washington state, the same working class tensions led to one of the most violent days in that state’s history. On November 11, 1919, two groups of vastly different ideologies clashed.

They were the anti-Bolshevik American Legion and the radical organizers of the Industrial Workers of the World, better known as the “Wobblies” who’d formed in the early 20th century, seeking to overturn the capitalist economic order and replace it with one big workers’ union. This was the post World War I era. Wages had been held down by the war effort, and now with the war ended, union members wanted better conditions and higher wages.

The Wobblies were well-organized, and their desire to establish a union headquarters here in Centralia, led to a clash that would become known as The Centralia Massacre of 1919.

The American struggle for better working conditions has, on occasion, led to unexpected results. One example is from 1888, at the Roslyn mines, in Washington state. When the Northern Pacific Coal Company laid off labor union workers who had been petitioning for eight-hour work days and higher wages, tensions reached a head and led to a labor strike by the Knights of Labor.

When the strike shut down the mines, strikebreakers were recruited by Northwest Coal Company, including 50 black laborers brought in from the East and Midwest who were transported by train with about 40 private, armed guards. Thanks in part to the Northwest’s booming coal industry, tensions eased as competition for employment reduced, and eventually Black workers organized as equals with United Mine Workers. At the turn of the 20th Century, African-American families made up 22% of Roslyn’s population.

After the mines closed here in 1963, the Black population began to decline and by the early 1970s only the Craven family remained. In 1976, William Craven was elected mayor of Roslyn -- the first African American mayor in the state of Washington.

Well into the 20th Century, striking continued to be one of the most effective ways for workers to receive better pay. That’s when a visionary leader named Larry Itliong entered the scene in California. In the 1930s and 40s, he’d helped organize a cannery workers’ union in Alaska, had led lettuce strikes in Salinas, California and organized asparagus strikes in Stockton. By September of 1965, his eyes were on the vineyards of Delano, California.

Itliong asked migrant worker leader Cesar Chavez to direct his Mexican-American farmworkers to strike as well. Chavez agreed and the two groups joined forces in what became known as the Delano Grape Strike.

Today, in honor of the progress made by labor organizers over the past decades, we celebrate Labor Day Weekend with numerous events and activities. For example, New York offers the Labor Day Carnival, and fireworks over Coney Island, and the popular Labor Day Concert in the U.S. Capitol, featuring the National Symphony Orchestra with free attendance.

Traveling Through America with John Lithgow